Post-Election: What's Next for Women and the Media 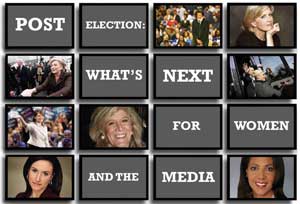 From coffee shops and dinner tables to Saturday Night Live, the media’s treatment of women has been scrutinized and dissected throughout the election cycle. From Senator Hillary Clinton’s run for the Democratic nomination to John McCain’s selection of Governor Sarah Palin as his VP candidate, women have been in the news.
Our media panel - some of America's most listened-to journalists - will consider the ways women have been portrayed.  What has changed for women as a result of the coverage of women's political participation, and what has stayed the same?  Can media be a positive tool for women in politics?  How can we inspire measured coverage of women in politics in general? watch video

The Wellesley Centers for Women (WCW) at Wellesley College is the largest women’s research organization in the United States. Its mission is to conduct scholarly research and sound action programs that place women’s perspectives and experiences at the center of the work. WCW’s work reaches a wide audience of  policy makers, practitioners, and advocates.