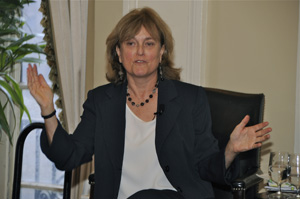 Layli Maparyan, Ph.D., the Katherine Stone Kaufmann '67 Executive Director of the Wellesley Centers for Women (WCW) at Wellesley College, has announced that Nan Stein, Ed.D., WCW Senior Research Scientist, as the Susan McGee Bailey Research Scholar, effective July 1, 2014. This award is presented to a researcher whose work places women’s perspectives at the center of the inquiry while addressing critical issues growing out of a global understanding of the lives of women and recognizing the importance of linkages and new insights inherent in an interdisciplinary approach. Maparyan made the announcement February 26th, during an internal meeting at the Centers:

"It is with great enthusiasm that I name Dr. Nan Stein as the 2014-2015 Susan McGee Bailey Research Scholar for a 12-month term beginning July 1, 2014. A leading scholar of sexual harassment and gender violence in schools, she has worked on these issues for more than 30 years. In the late 1970s, two decades before the U.S. Supreme Court ruled on peer sexual harassment in schools, Nan and others, through the Massachusetts Department of Education where she worked, conducted the first survey in the country on peer-to-peer sexual harassment in schools from which they learned that these behaviors were ubiquitous, persistent, and tenacious—affecting girls across schools and communities in the state—a reality previously unrecognized and unarticulated. She has been breaking ground, leading public discourse, and informing policy makers, educators, and advocates ever since.

"Susan McGee Bailey, for whom this award is named, met Nan in the early 1980s and, recognizing her expertise in sexual harassment in schools, recruited her to the then Center for Research on Women in 1992. It was then that Nan served as co-principal investigator and lead author of the Seventeen magazine survey on sexual harassment in schools, "Secrets in Public: Sexual Harassment in Our Schools." Since then she has directed several national research projects on sexual harassment, gender violence, teen dating violence, and bullying in schools. She has advocated for decades to disentangle harassment from bullying, a framework backed by Title IX and recently publicly reiterated and re-enforced by an October 2010 memo from the U.S. Department of Education’s Office for Civil Rights.

"A well published scholar in educational, legal, and violence against women journals and edited books, she has also written her own book, Classrooms and Courtrooms: Facing Sexual Harassment in K-12 Schools; and three teaching guides. In addition, Nan has frequently given lectures, keynote addresses, and training to school personnel, and sexual assault/domestic violence agency staff. Additionally, she has served as an expert witness in over one dozen federal Title IX and state lawsuits on sexual harassment, child sexual abuse, and civil liberties in K-12 schools. A 1994 lawsuit—known as the “Coed Naked T-shirt” case on behalf of two high school boys at South Hadley, MA, high school (who are now both lawyers) reflected her commitment to the First Amendment. These brothers had worn T-shirts that said “Coed Naked Band”, and on the back of the shirt, it said “Do it to the rhythm” (they were members of the school band and their mother gave them these T-shirts). The school district claimed that those words constituted sexual harassment, though no one complained and the words were gender neutral. Ironically, both sides in the lawsuit — the South Hadley school district as well as the ACLU lawyers who were defending the boys – asked Nan to serve as the expert witness. This case not only went through the federal courts but also landed in the Massachusetts Supreme Judicial Court, which ruled unanimously on behalf of the boys’ right to First Amendment protected expression and speech.

"Nan was also involved in the early stages to challenge zero tolerance policies in schools and state legislatures. Along with juvenile rights lawyers, they produced a book—Zero Tolerance: Resisting the Drive for Punishment in Schools—in 2001 and garnered funding for research from several private foundations, including the Soros Foundation. This ground-breaking work against zero tolerance is now the status quo as the U.S. Departments of Education and Justice have spoken out against zero tolerance. That was not the case in 2001 when Nan and others were challenging these suspensions and expulsions and what became known as the “school-to-prison pipeline.”

"Currently, Nan is working on the third stage of a study, Shifting Boundaries, which evaluates classroom lessons and school-wide interventions in middle schools intended to reduce sexual harassment and precursors to teen dating violence. Together with her research partner, she has been conducting this, the first randomized, controlled trial of middle school students on the issue, with funding by the National Institute of Justice, the research arm of the U.S. Department of Justice (DOJ) since 2005. This project puts forward a new framework to approach preventing teen dating violence—not by the monolithic "healthy relationships" approach, but rather by suggesting "boundaries and personal space,” less subjective concepts more easily understood by adolescents. The findings have shown promise for preventing and intervening on teen dating violence.

"Building on this scholarship and drawing from her 30 years of research on sexual harassment in schools, Nan was invited to be one of the keynoters during an invitation-only conference on gender violence among youth sponsored by U.S. Department of Education (DOE), the DOJ, and the Department of Health and Human Services in April 2011. She also attended a small gathering at Vice President Biden’s house celebrating the anniversary of the signing of the Violence Against Women Act (VAWA) in September 2011, and she briefed the U.S. Senate Judiciary Committee on teen dating violence that following December. More recently, a February 2013 letter to chief state school officers from U.S. DOE Secretary Duncan referenced the Shifting Boundaries study as an example of research that shows that schools can make a difference in preventing violence and other forms of gender-based violence. A White House press release listed Shifting Boundaries among the latest research in support of the reauthorized VAWA signed by President Obama in March 2013.

"Nan has been featured in scores of print and broadcast media stories, including live appearances on The Today Show; Nightline with Ted Koppel, Oprah, Good Morning America, and Phil Donahue. She also appeared in taped stories on NBC Nightly News; CNN; CBS Evening News with Dan Rather; and All Things Considered on NPR. Nan has been appointed to the editorial boards of the Violence Against Women Journal (2000-2003) and the Journal of School Violence (2001), and was appointed by the Governor of Massachusetts to the Governor’s Commission on Sexual and Domestic Violence. She is a founding member and an Advisory Board member of the American Civil Liberties Union Bill of Rights Education Project. 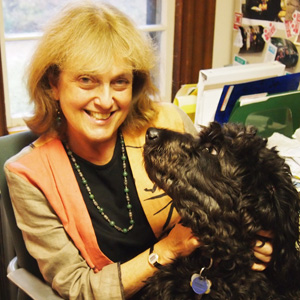 "A former middle school social studies teacher, Nan holds a Bachelor of Arts in History from the University of Wisconsin, a Masters of Arts in Teaching from Antioch College Graduate School of Education, and a Doctorate in Education from Harvard University Graduate School of Education, from which she received the Outstanding Contribution to Education award in 2007. Her research has been supported by numerous private foundations and public agencies, including the U.S. DOE, the U.S. DOJ, the Centers for Disease Control and Prevention, NASA, the National Education Association, and the Soros Foundation. Accompanying Dr. Stein to Cheever House over the past two decades have been her beloved dogs who keep her healthy through daily walks and laughter, bringing joy to her and others (especially students) at WCW—German Shepherd Maya in the early days, Lab-Shepherd-mix Bosco in the late 90s and early 2000s, and Golden Doodle Kami for the last five-and-a-half years.

"As the Susan McGee Bailey Scholar over the next year, Nan will critique and challenge the "healthy relationships" framework as an effective route to preventing teen dating violence. She will also explore ways to adapt Shifting Boundaries interventions to elementary grades to prevent relationship abuse. Nan will develop a paper with her Wellesley College intern looking the gendered aspects of sexual harassment and violence, focusing on a variety of incidents that have occurred across the U.S., and examining the ways in which institutions such as the schools themselves, the media, and the criminal justice system handle this often ignored form of violence. It is the Nan’s goal to highlight possible pathways to justice and critique existing approaches to the gendered harassment and violence in U.S. schools.

"It is with great pride in these accomplishments that I present to you the next Susan McGee Bailey Research Scholar, Dr. Nan Stein. Please share in offering her big congratulations!"