Not a Nation of Immigrants: Settler Colonialism, White Supremacy, and a History of Erasure and Exclusion By Roxanne Dunbar-Ortiz

Dunbar-Ortiz asks, ‘Is it necessarily a good thing to feel ownership over a celebratory, white narrative of the American past?’ 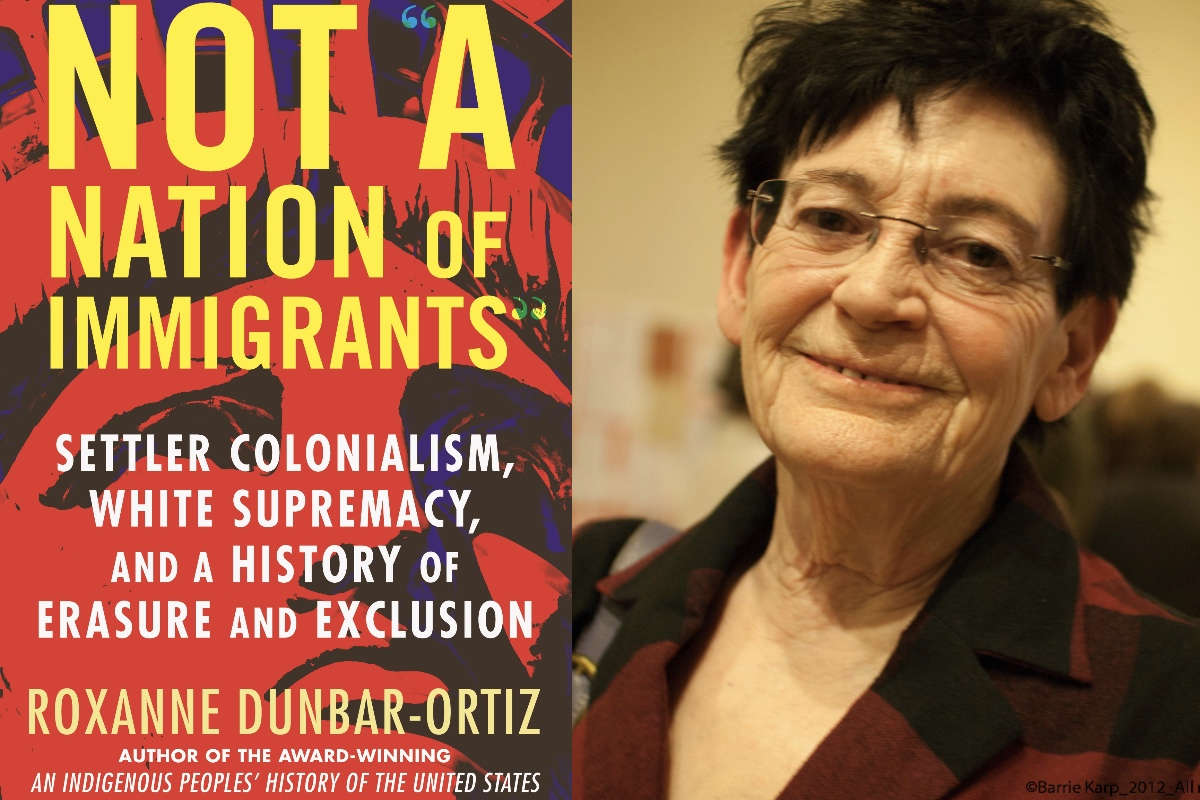 In early 2017, thousands of protesters trekked to JFK airport to attempt to force the release of travelers from eight predominantly Muslim nations from ICE detainment. The next day, my family and I joined tens of thousands of people in Battery Park, at the southern tip of Manhattan, and listened to a range of speakers broadly decrying Donald Trump’s immigration policies. With the Statue of Liberty in the background, Senator Chuck Schumer proclaimed, “What we’re talking about here is that beautiful lady in the harbor—and what America is all about.”

Several weeks later, our family headed to the Richard Rodgers Theatre to finally see Hamilton. By that time, Lin-Manuel Miranda’s musical had become a central text of the burgeoning #Resistance after its stars implored vice-president elect Mike Pence to listen to “the diverse America who are alarmed and anxious” about the new administration’s priorities. That night, as the first act ended with the Black and brown actors who played Hamilton and Lafayette declaring “Immigrants, we get the job done!” the entire audience rose in sustained applause.

In both of these venues, I witnessed and took part in an ideological formulation of the United States as “a nation of immigrants.” As Roxanne Dunbar-Ortiz details in her new book, Not a Nation of Immigrants, this ideology emerged as a “mid 20th century revisionist origin story.” In an era of decolonization and civil rights protest, politicians such as (then) Senator John F. Kennedy and New York Representative Emanuel Celler positioned immigration, rather than slavery, colonialism, militarism, or even the state, as the force that had built American power. Dunbar-Ortiz’s radical movement bona fides are vast. She was a founder of the early women’s liberation group Cell 16, is a long-time activist in the international Indigenous movement, and author of the vital An Indigenous Peoples’ History of the United States. Her new book aims not to historically contextualize the “nation of immigrants” story but to undermine it, revealing how it obscures, most centrally, the United States’ founding as “an empire on conquered lands.” Grounded in a self-satisfied explanation of the US as the product of immigrant hard work and place- making, the “nation of immigrants” story masks, she writes, “the settler-colonial violence that established and maintained the United States and turns immigrants into settlers.”

Hamilton provides her initial foil. Dunbar-Ortiz questions the production’s underlying attempt to, in the words of Leslie Odom, Jr. (who inaugurated the role of Aaron Burr), “make hundreds of thousands of people of color feel a part of something we don’t often feel a part of.” Expansively surveying the historical Andrew Hamilton’s actions to centralize state authority, to facilitate capitalist power, and to build a nation on the imperial conquest of Native people, while challenging Hamilton’s portrait of him as an abolitionist and advocate of immigration, Dunbar-Ortiz asks, “Is it necessarily a good thing to feel ownership over a celebratory, white narrative of the American past?”

In the subsequent seven chapters, she shows that, while the immigrant experience has obviously been central to the history of the United States, immigration has always occurred on a topography created by settler-colonial violence and white supremacy. The chapters themselves, apart from the opening exploration of Hamilton, focus on the history of various immigrant groups, exploring the process by which, and problems inherent in, how the “nation of immigrants” trope obscures their (often inadvertent) participation in the erasure of US imperialism and Indigenous people themselves.

The chapters function largely as stand-alone essays, each introducing a term or frame that disrupts the sanitized version of US history. For instance, chapter two argues that “settler colonialism”—an iteration of colonialism that pursues the elimination of Indigenous people to invent “terra nullius, unpopulated land” that can be repopulated by immigrant settlers—was the central project of the US at its founding. The book’s remaining chapters analyze the histories of particular immigrant populations in relation to settler colonialism. Chapter three distinguishes enslaved Africans from the categories of immigrants, indentured servants, or settlers—renaming them “arrivants,” a term the African Caribbean poet Edward Kamau Brathwaite introduced “to describe the status of African people forced into slavery in the Americas.” Exploring Scotch-Irish, Hispano, German, Irish, Italian, East Asian and Mexican migration, she argues that migrating to a nation formed by “the vortex of settler colonialism sucked immigrants through a kind of seasoning process of Americanization.” As they became “hyphenated Americans,” immigrants made homes and claimed belonging in a nation “founded as the first constitutional capitalist state and an empire on conquered lands.”

Dunbar-Ortiz, for the most part, does not castigate immigrants for this history. “By default, they became settlers,” she writes. She does, however, call attention to two distinct practices that particularly obscure the nature of immigration in a settler-colonial nation. First, immigrant groups that came to be regarded as White practiced “self-indigenization,” the claim of colonized territory as their affective homes, particularly when they themselves faced dispossession. Paying special attention to Scotch-Irish descendants in Appalachia and Hispano people in New Mexico, she suggests the claims of scholars and immigrants themselves to portray those populations as “native” reflects the “deep psychosis inherent in US settler colonialism” in which creating attachment to place “disappears the Native and bestows indigeneity upon these settlers.” Second, she argues the rhetoric of multiculturalism, emphasizing the contribution of more recent immigrant groups to the US, serves as a more recent “mechanism for avoiding acknowledgement of settler colonialism.”

Dunbar-Ortiz’s critiques of “self-indigenization” and multiculturalism together suggest the differences between her proposed revision of US national narrative and that of the 1619 Project, currently the subject of much right-wing ire. The 1619 Project poses an alternative to an ideology that saw national ideals of freedom and liberty emanating from White “founding fathers” and the documents they produced. Instead, it suggests freedom and liberty were defined by slavery and became meaningful only through the centuries of struggle of Black Americans against oppression. As Nikole Hannah-Jones writes in the 1619 Project’s Pulitzer Prize-winning lead essay, “More than any other group in this country’s history, we have served, generation after generation, in an overlooked but vital role: It is we who have been the perfecters of this democracy.” At its heart, then, the 1619 Project envisions a nation in which acknowledgement of history and political struggle can combine to change the meaning of the nation itself for the better.

Dunbar-Ortiz offers no such trajectory. Hannah-Jones’s formulation of Black struggle as a refining crucible for the nation’s ideals do not hold if the origin point of American history is not 1776 or 1619 but 1492. Multicultural inclusion in the national community, even multicultural refinement of national ideals, cannot salve the nation if “the fundamental unresolved issues” include Indigenous genocide as well as the continual denial of “Indigenous lands, treaties and sovereignty.” Settler colonialism is not, as Dunbar-Ortiz insists, a past oppression that can be overcome; instead, it is an ongoing structure inherent to the United States that makes complicit all those who live on Indigenous lands.

This is not an easy book to read. In certain chapters, its narrative leaps a century or more over the course of a section break, leaving the reader wondering at connections between, say, Irish  immigrant politicians gaining control of Tammany Hall in 1872 and Irish construction workers beating anti-war protesters in Lower Manhattan in 1970. Dunbar-Ortiz also has a habit of naming writers she agrees with while using general terms such as “US historians” for those she sees as misguided. More centrally, the book leaves unanswered the fundamental question of “What is to be done?” Many Indigenous activists have taken “land back” as their prescription, but Dunbar-Ortiz does not, nor does she extensively explore how Indigenous people attempted to challenge dispossession and exclusion in the past.

Radically, this book requires the reader to reconsider our own #Resistance and to think through the implications of the fact that, for the vast majority of us, our homes, both as structures and as feelings of belonging, are built on land that was taken from Native people through coercion and violence. Dunbar-Ortiz powerfully shows how stories of the United States as melting pot, salad bowl, or even flawed-but-perfectible immigrant haven, have served to obscure not only empire but Native people themselves. Not a Nation of Immigrants is difficult to read because it should be.

Andrew Needham is Associate Professor of History and Director of Graduate Studies at NYU. He is the author of Power Lines: Phoenix and the Making of the Modern Southwest. (Princeton University Press, 2014) and co-editor of the forthcoming Indian Cities: Histories of Indigenous Urbanization (University of Oklahoma Press, 2022).