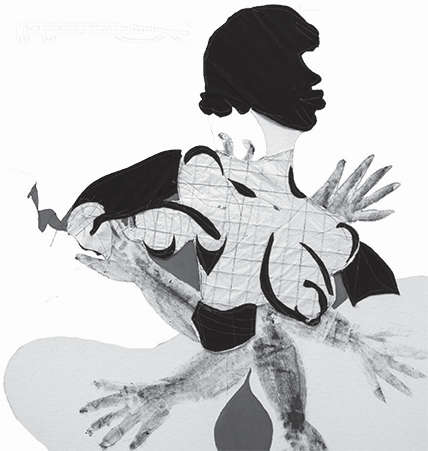 In Jezebel Unhinged: Loosing the Black Female Body in Religion and Culture, independent academic and Feminist Wire founder Tamura Lomax uses the cultural jezebel trope and the biblical Jezebel character to explore the Black Church’s duality as “wellspring of black religiosity, cultural formation, and liberatory acts” and an institution mirroring “the antiblack, sexist, classist, homophobic, transantagonistic violence in the rest of the world,” particularly in the ways the Black Church and black popular culture produce and engage in discourse about black women and girls and mark them as sexually deviant. The title also plays on The Potters House Church pastor/author/ movie producer Rev. T.D. Jakes’ book, conference series, and movie, Woman Thou Art Loosed!

Lomax witnessed the synchronous relationship between the Black Church and black popular culture growing up as the daughter of a black Baptist preacher. In her prefatory remarks, she shares a vivid memory of the first time her black female body was marked as deviant. Lomax was eleven at the time. After a prominent elder in the church told her father he was distracted by her butt during altar call, Lomax’s parents chastised her for “looking too grown” and banned the dress she had worn that day from her wardrobe. The elder was not disciplined for sexualizing a child’s body.

Lomax’s anecdote is fami l iar; I ’ve heard similar stories from many black women who grew up attending church regularly. A man sexualized their child or adult bodies, and someone, often a woman, told them to cover up. Like them, I was reared in the Black Church, but I don’t remember being marked until adulthood, and not in quite the same way. Once, as I entered the sanctuary before a Mother’s Day service, a deacon extended to me the greeting most women were receiving that day: Happy Mother’s Day. When I told him I didn’t have children, he said, “Well, you will have children one day, so it’s a happy Mother’s Day for future mothers, too.”

I asked him, “You really think every woman is destined to have children?”

Taken aback, he replied, “Well, yes.” I said, “Not every woman wants to be a mom, or can be,” and found my seat in the sanctuary.

I’m sure the deacon considered his comment innocuous, but I heard patriarchy and oppression in it. I heard, “Isn’t carrying and birthing children what God created your body for?”

I was in my late twenties then. In a few years, I would read about the founding of the National Association of Colored Women (NACW) and learn how middle class black women in the late nineteenth and early twentieth centuries policed themselves and other black women to prove that they, too, were chaste, pious, and capable of running a good home. They wanted to show that they, too, deserved the respect reserved for white ladies and hoped their example of white, middleclass, patriarchal gender standards would demonstrate blacks’ ascension into the civilized world, and possibly lead to some relief from the racialized terrorism African Americans were experiencing throughout the US at the time.

After my reading, I thought of the deacon’s comment again and linked it to respectability. Perhaps he believed my role as a black woman wasn’t simply motherhood, but community uplift through repudiation of centuries of hypersexualized discourse on black women’s bodies.

As Lomax observes in chapter five, the repudiation route to black progress requires the continued promotion of what she calls black feminine-ism,

a mass-mediated atavistic discourse, representation, and belief grounded in natural hierarchy, heteronormative-patriarchy, hypermoralism, sexual dissemblance, wifedom, motherhood, beautification for others, erotophobia, phallic power, and racial loyalty that reproduces, maintains, holds together, and justifies jezebelian ho discourse and theology, the discourse on black ladyhood, the myth of the black matriarchate, and the black “nuclear” project in the name of black normalcy and racial progress.

Black feminine-ism requires black women to embrace their place in a cis heterosexual nuclear black family led by a black patriarch. It also requires black women, the Black Church, and black culture to continue investing in sexual binaries for black women and girls. The black female can be the cultural ho who can’t be turned into a housewife, the biblical Jezebel or the Virgin Mary, a whore or a Proverbs 31 woman—with no room for nuance or complexity.

Lomax’s work in Jezebel Unhinged is to detach black women from these binary interpretations, lessen their impact on black women, understand how and why black women have participated in and invested in them, and what value the discourse has for them. Lomax recalls her college days when she and her friends would defend themselves against street harassers calling them hos but also dance freely to beats under misogynistic lyrics in their dorm rooms. Similarly, Lomax affirms black women who have filled the pockets of preachers and entertainers like Rev. T.D. Jakes and Tyler Perry, two of the chief producers of ho discourse, not as uninformed but as “complex cultural readers … who know how to take what they need and discard the rest.”

Acomplex cultural reader herself, Lomax argues that a black feminist study of religion is needed to complete her mission. Though criticizing a Jakes sermon or a Perry movie—both of which Lomax does in chapters six and seven, splendidly, fairly, and without regard to whose feelings she might hurt—can cause chaos at a black family barbecue, Lomax’s positions on womanist cultural criticism and black feminist thought are potentially much more explosive in the circles in which this book is most likely to be read. In chapter three, she explores the work and limitations of womanist thought in religion for critically reading jezebelian sexual theologies. She applauds womanist scholars for developing a theological framework that begins with the experiences of black women, names oppressions in religion and society, and seeks liberation from those oppressions but argues that their work falls short for black women and girls seeking freedom from ho/lady binaries. Womanist readings, Lomax contends, focus too much on white ideological bias, limit willful and nuanced black participation in heteropatriarchal racist tropes, and leave black women in an inescapable narrative of “suffering, resistance, and survival” that doesn’t take them beyond traumatic and oppressive constructs.

For Lomax, black feminists provide a language and strategy for transcending an oppressive moral order. They make room for readings she calls “ugly” and “messy,” for understanding how “texts that fail to feel like love may still draw black women and girls in and the complex ways they negotiate their relationships within and toward those texts.” Lomax’s main critique of black feminist cultural thought—distinct from womanist thought—is that scholars have neglected the Black Church, despite its prominent ideological and physical role in the lives of black women and girls. Lomax steps in to fill that gap.M

Building on the work of black feminist scholars such as Patricia Hill Collins, Hortense Spillers, and Joan Morgan while also taking cues from womanist scholars like Kelly Brown Douglas, Jacqueline Grant, and Emilie Townes, Lomax’s black feminist study of religion “contends the following: It holds that Black religion is a primary text and source of meaning making in black women’s and girls’ lives.” It gives black women and girls agency and acknowledges and welcomes the experiences of homosexual, transgender, and gender non-binary black women. It rejects notions of black women’s bodies as sites of sin and “pushes the gaze toward choice, consent, satisfaction, safety, and the ugly and messy.”

Lomax’s articulations on the work of black religious cultural thought span several pages and provide possibilities for dissertations for decades. I wonder, though, whether a new theoretical framework is necessary. Lomax isn’t the first scholar to critique womanist cultural thought, and it is curious that her bibliography does not include work by Monica Coleman, a religious scholar who, in 2006, acknowledged some of the same limitations in her article, “Must I Be Womanist?” (though her critiques were not specific to jezebel discourse). Coleman also edited the 2013 volume, Ain’t I a Womanist, Too? Third-Wave Womanist Religious Thought, in which established and emerging scholars discuss expanding what it means to center black women’s experiences in theology and religious thought. I question, then, whether Lomax’s reading of jezebelian texts requires a black feminist study of religion or a more in-depth discussion with the current direction of womanist scholarship.

I also wonder how audiences outside of academia will receive her critiques. I could share anecdotes of “black feminist” being a radioactive adjective compared to womanist outside of academia, but that’s not my concern here. According to her preface, the eleven-year-old Tamura needed help making sense of why a church elder sexualized her and why her parents reacted as though it were her fault. She states that her book “is the text I wish my parents or I had when I was growing up.” As an independent black academic, Lomax occupies one of those complex (ugly?) spaces she may depend on black feminism to make sense of. “Academic” demands the robust theoretical discourse presented in chapters three and four. but, “independent” implies a responsibility to eleven-year-old black girls still being misread in Black Church pews. This is not the book for them, or for most of their parents. Jezebel Unhinged is, however, a book for black women who want freedom, even those who might run Lomax out of their church. It’s an ambitious book I would love to see her selling behind a vendor table at T.D. Jakes’ next Woman Thou Art Loosed! Conference in Dallas, October 2018.

Mariam Williams is a writer, arts educator, and public historian based in Philadelphia. She holds an MFA in creat ive wri t ing from Rutgers- Camden, is a VONA alum, and writes a column on faith, race, and gender for National Catholic Reporter. Her review of No Ashes in the Fire: Coming of Age Black & Free in America by Darnell L. Moore appeared in the May/June 2018 issue of the Women’s Review of Books.