I bought five ears of corn for a friend who was coming to visit. She said her front teeth were temporary, and she might need to cut kernels off the cob. It rained, and the grilling was cancelled. When I opened the fridge, I saw a canvas bag in the bottom bin. Inside the bag were five ears of corn. From a month ago? A year ago? There was mold and blackened bits but no smell—five decomposing little corpses, each wrapped in its own shroud. Did I live here?

I remember stepping off the bus from Newark Airport and wheeling my bag through Times Square. I would look out the window of the uptown bus, recalling every shop and patch of green along the route, until I was on my street. Home, in a manner of speaking. I never liked where I lived. Not really. It was a marriage of convenience. When you live in NYC, you love, above all, that you live in NYC. 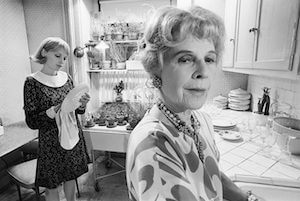 The man I live with told me he imagined living on after me. He does this several times a day is my guess. I said, “Don't kill me off so fast.” He said if I died he would sell our house. Last night I was staying with a friend in Massachusetts. I woke up and thought I might not be peeing enough, so got up and peed. I said to my friend, “I wouldn’t sell our house.” She looked past me and said, “You don't know what you’d do.” I wondered when the last time was that I’d surprised myself. I thought it was the other day, when I realized I misread what people are feeling. Once a thought like this forms, it seeps over your entire life like the orange drops used to numb you during an eye exam. Years ago the friend I was staying with divorced me for insulting Shakespeare and having a facelift. Fortunately, I can make her laugh.

One of the old movies was A League of Their Own (1992). The man I live with was all like, “Tom Hanks, you are such a bad actor you can't even play a drunk.” I liked the movie’s sentimental version of feminism, where you look at a forgotten phenomenon, like women in baseball during the war, and show how women—with economic backing and more control over their lives than in domesticity—wake up to the power of their bodies. Madonna is adorable with partner Rosie O'Donnell, when they were besties IRL too. Madonna isn't allowed to take over the film by director Penny Marshall, and Madonna looks like she's having a very good time, diving face-first into home base and dancing with strangers in a bar.

The movie belongs to Geena Davis and to the ambivalence her character feels about claiming her own life. She can't do it, ultimately, and the film shows us the social reasons why. As the credits roll, we see the real players from the league, now aged, in a game, and they are so alive, still walking with butch swagger, still tearing around the bases in a way they might not be able to run for a bus. Movies about female athletes are always thrilling. The body lifts off from the ways it is understood and falls in love with defying gravity.

The other old movie was Rosemary's Baby. I saw it when it was released in 1968, a second time I don’t remember, and a third time last week. In 1966, when I was nineteen, I married a boy. I don't exactly know why. I loved him, but married? I mean, I don't know what I mean. The day I got married I knew I shouldn’t do it.

In 1968 I noticed that, in the movie, Mia Farrow is dressed in the clothes of a child or a puppet, pinafores and Peter Pan collars. She is the yellow of a sunflower, and her apartment in the gray Dakota is yellow. I don't remember if I registered that her husband laughs off raping her while she’s asleep and that it turned him on. She looks more confused than angry. She isn't allowed to show anger in this world until she figures out her husband pimped her to the devil for better acting parts.

There’s so much pleasure in this film. It stays with you days later, like Rosemary’s sense that sex with the devil was real and not a dream. Much of the film’s brilliance is in the casting. Ruth Gordon's performance as Minnie Castevet is genius in the details. The way she twists the fork in her mouth eating cake. The way she sniffs out the price tags on other people’s furniture. As soon as we see the smirk on the mouth of John Cassavetes—it’s permanent, it’s the way he looks at life—we know that nothing that happens to Rosemary is as bad as having married him. Whether or not Roman Polanski consciously set out to do this, he made a movie in which the horror is ordinary bourgeois marriage.

Of course Rosemary will nurse the devil she has given birth to. How much worse can a devil be than her husband and the other humans who have used her? Satan by comparison is bland and meh, like the members of the coven, composed of social strays shunned not for their demonic powers but their awkwardness. In any movie with Charles Grodin, he is going to be a snake. The movie is a comedy. It's why we don't need to see the demon baby.

The trees leafed up earlier this year than last. I think. People are writing to me in dreams who don't write to me in real life. A friend wrote to say he'd grown depressed after the people who were staying in his house during the pandemic went back to their lives. Did they think they were returning to who they’d been before? In Long Beach, during hurricanes, the rain falls sideways. If you step into it, it feels like nails flying at you, and it’s all you can think about. It’s relaxing to think about one thing.

When I read remarks prefaced with a series of identity markers (like bar code)—as a gay, het, trans, white, black, disabled, poor, rich, and so on—as if this is who you are, I think, this is not who you are. I think, who you are is the tomato you grew and served to a friend. I think, you are your face in sleep. You are the way you lick the bowl and hold out your hand for a dog to sniff.

I also watched Hacks (HBO)—to check out how feminism is being served these days. The show is enjoyable, owing mainly to the rapport of leads Jean Smart and Hannah Einbinder. The most startling sequence occurs in episode eight, the finale, when Smart's character goes to a small comedy club to try out new material and the male MC introduces her with a series of insults. Smart’s character, who is famous and rich, offers to pay him $1.7 million if he agrees never to set foot on a stage again, adding that if he accepts the deal and afterward performs, he will owe her double that amount. He accepts the offer, of course, because his comedy no longer has value, the crowd approves, egging him to take the money and disappear.

The scene follows one in which Smart and a female crony from her touring years recall the club owners who groped them and the slams from male comics they smiled through. The friends are meant to be in their sixties. The young woman they are with, who is in her twenties, is upset that the older women felt they had no choice. She wants to nudge them into a #Me-too moment without blaming them, although she does blame them. Smart takes in what she says. It prompts the way she handles the emcee.

The problem with the incident and with the show as a whole is chronology. It’s as if only twentysomethings get feminism and they also seem to have invented it. Smart plays a kind of Joan Rivers standup, who hawks products on QVC and sells out her intelligence in her act. If Joan Rivers were alive, she would be eighty-eight. Joan was young enough to have become a feminist in the 1960s and 1970s and to have changed her shtick, but she didn't. It doesn't matter.

Smart's character was in her teens and early twenties when the women's movement shook everyone on the planet, whether in excited agreement or raging opposition. A woman the age of Smart’s character would not need to hear about any of this from a twentysomething. She would have heard it from the movement, even if she was outside it. Smart’s character says to the younger woman, who is helping her write a new show, “Yes, yes, I know, I know, but how to make it funny?” Which is always the question.

A visitor came today, and when we hugged our faces touched. The visitor reminded me of people in general. It was like remembering I had once known how to juggle. I had a boyfriend once who was a cheater. I wasn’t with him long enough to lose interest in him. That was his great gift to me.

Every fight I’ve ever had with the man I live with is basically about Bob Dylan.

Recently I had a bout of excellent sleep. It was strange and scared me. It’s about to rain. There is dirt under my nails. I bought a bird feeder at a yard sale. Birds arrive in numbers: tiny yellow finches, birds with red heads that circle, birds that wait their turn. The new feeder is all the birds can talk about. Some try to throw each other off and say, “Quick, turn around, it's Nina Simone," as they fly away with the best seed.

Laurie Stone is the author of Everything Is Personal and Laughing In the Dark, among other books. A recipient of the National Book Critic’s Circle excellence in criticism award, she was theatre reviewer for The Nation magazine, writer at the Village Voice for twenty-five years, and critic-at-large for Fresh Air.