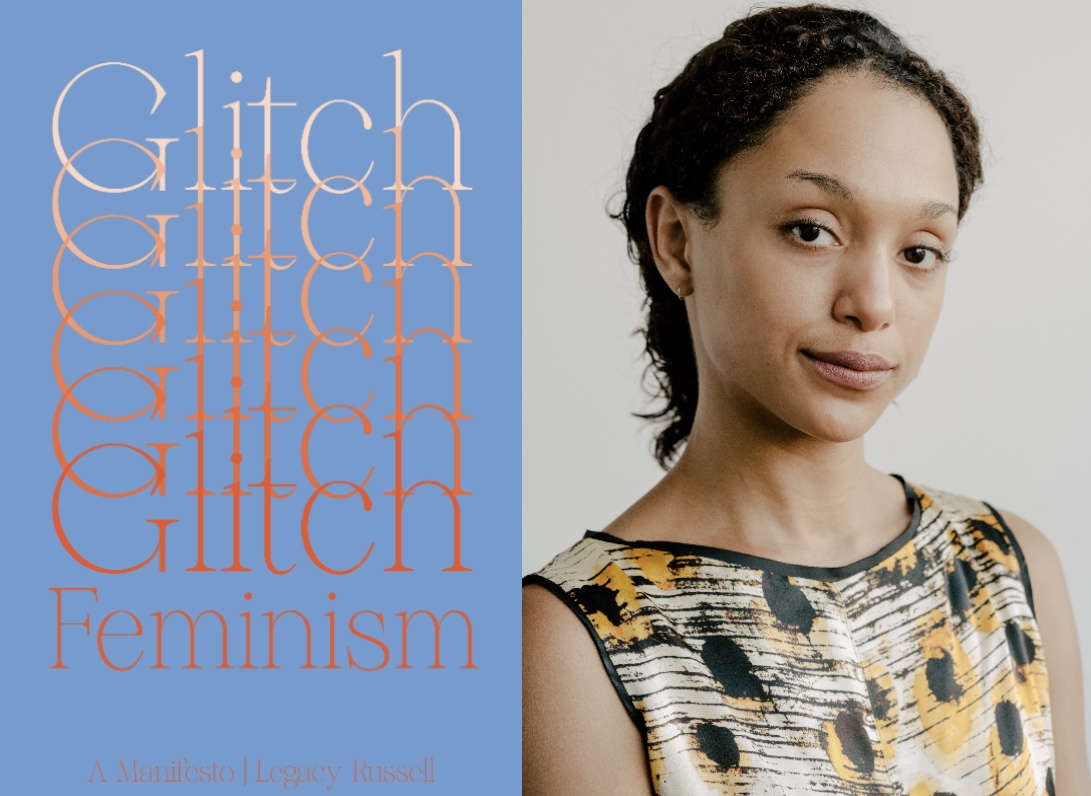 Audre Lorde, of course, was the legendary feminist who so pointedly reminded us that “the masters’ tools will never dismantle the masters’ house.” In her/their manifesto, Glitch Feminism, writer, curator, and artist Legacy Russell invites us to consider that, while Lorde’s statement remains valid, there is always the possibility of intentionally breaking the masters’ tools, pushing them to the point of failure.

This is the nature of the glitch, the moment or place where a technology fails to function, most typically due to a crisis caused by some sort of unaccounted-for variation. Technologies are innately limited by the literal and figurative structures they use to function; the built environment, as disability theory has taught us so pertinently, is limited both by the builders’ imaginations and the materials used. Escalators are great until they are encountered by someone who uses wheels rather than legs to move around, at which point we have a glitch, an inability of the technology of the escalator to do what it is supposed to do. The human being, in this situation, is not the thing that has failed. This technology created to raise and lower bodies through space has failed. It has glitched, or has been glitched, stymied by a human user whose reality exceeds the assumptions that were factored into the design of the technology.

In the digital world, whose integration into our day-to-day lives is Russell’s point of entry to considering the political and social potential of the glitch, glitches are not only the mundane incidents of machine failure, like the moments we spend staring at the spinning rainbow beachball on our screens hoping we saved our work recently enough. They are also the ways in which our realities and imaginations are vaster than the digital media through which we attempt to process them. The digital world cannot keep up. It glitches.

Exhibit A, in this manifesto, is gender. People experiment with ungendering, regendering, and exponentially expanding the possibilities of gender as both a fixed and an unfixed category, which in turn renders the “male” and “female” tickyboxes of database-driven questionnaires less able to function. Consequently, algorithms that depend on binary gender may also fail to function. Those algorithms, whether literal and digital or conceptual and cultural, support the culture of our worlds both online and AFK (“away from keyboard,” Russell’s phrase of choice for describing the less or non-digitally engaged portions of our lives). They are connected to the labor and production expectations of capitalism, the social expectations of patriarchy, and the hierarchies of racism, ableism, misogyny. To “glitch” gender digitally, Glitch Feminism argues, has the potential to glitch social and cultural technologies. The same, Russell contends, is true of glitching race, sexual orientation, and so on. In the chapter titled “Glitch Survives,” she writes: “We recognize the contributions of blackness toward liberatory queerness, and the contributions of queerness toward liberatory blackness. We fail to function for a machine that was not built for us. We refuse the rhetoric of “inclusion” and will not wait for this world to love us, to understand us, to make space for us. We will take up space, and break this world, making new ones.”

If these technologies can be glitched—if they can be broken or caused to fail by the introduction of many insistent variables—then they become less useful. Particularly in the second half of the book, Russell does some suggestive conjuring with the dichotomy of usefulness and uselessness. The individual person’s willingness to become a glitch, to take the Whitmanesque notion of “containing multitudes” and insistently introduce it to systems that cannot accommodate those multitudes, represents a mode of refusing to play the game of being usable by those systems. Rendering one’s self (or selves) useless to the technologies that regulate our lives is a radical notion, and, insofar as most of us are also dependent on these technologies to some extent for our survival, a utopian one. This being a manifesto, and for that matter one steeped in the values of conceptual art, the pragmatics are left as an exercise for the reader. Nevertheless, it is a point well taken that as feminists we must consider the ways in which we make ourselves useful and usable by systems and technologies that do not necessarily benefit us and consider the merits of intentional uselessness as a politically resonant alternative.

As with a number of "cyberfeminist" theorists before them, Russell is a champion of the imagination and, although they do not use the word much, of play. As Russell accurately notes, our digital lives have become thoroughly colonized by white supremacist heteropatriarchal ableist capitalism. The radical epistemological freedoms that white cyberfeminists once thought they glimpsed in the vast twinkling reaches of the digital have never truly existed. (Russell’s looking at you, Sherry Turkle and Donna Haraway.) The Internet began its life as a military communications project, after all, and problems ranging from technological accessibility to the political economy of race in digital development have since become widely acknowledged. But the artists Russell discusses nevertheless find digital spaces for forms of imaginative, multiplicative, constantly shifting aesthetic and conceptual play that both births and celebrates glitches. The glitch, as Russell embraces it, is a gleefully expansive contrarian aesthetic that supports a mode of performance both inquisitive and destructive.

Make no mistake, Glitch Feminism is a work of theory, and radical theory at that. The glitch, and its generative potential, make a grand intellectual chew toy. Indeed, the intellectual, aesthetic, and symbolic are the realms in which the glitches Russell discusses seem to make themselves most felt. As Russell argues compellingly from her own experience of digital life, the separation between the digital world and the analog one is increasingly fictive, particularly when it comes to how we experience the space they occupy in our lives. “On the Internet,” Russell reminds us, “we go to the bank, we pay our student loans, we speak to our friends, we read news and learn about the world.”

Still, as a reader I found myself constantly tempted to consider how glitch feminism might materialize. The digital world offers us the potential to disrupt and explode expansively, to resist and refuse being concretized in all the various binarizing and polarizing ways that the technologies of our culture systematically do. Over time, certainly, digital experience has the potential to create cultural change that shapes our analog lives: meeting and developing connections with potential romantic partners online is now so commonplace that there are TV ads for Match.com, for example, whereas when I was an Internet newbie merely meeting up with someone you knew from online for a meatspace cup of coffee was considered bizarre and possibly dangerous. (In Internet years, I am slightly older than Julian Dibble’s 1993 “A Rape in Cyberspace.”) But the transition from digital reality to the analog realm, particularly with regard to things that glitch accustomed systems, suffers from significant lag. It is slow, and inevitably much is lost in translation, simplified, dumbed down to fit the limitations of the known. Is glitch feminism, then, limited to the digital? What does it mean for its feminist relevance if it is, given everything we know about the limitations of sex, gender, race, class, etc. on digital participation?

Russell does not tell us. The constant transformation of ongoing glitching is where she sets her sights, a sense of the self as cosmically unbounded and thus repudiating as oppressive the limitations of all technological structure. If I, or any other reader of Glitch Feminism, want the bread of a less fantastical praxis, we will be disappointed: Russell is serving roses. But they are wild, shape-shifting roses, outrageously lush and wondrous, and it is certainly worth taking a moment to find out what yet-unimagined visions we might have if we stop for a moment to smell them.

Hanne Blank is the author of numerous books including Fat (Bloomsbury, 2020) and Straight: The Surprisingly Short History of Heterosexuality (Beacon Press, 2014). She is on the faculty of Denison University.

Editor's note: An earlier version of this review was titled "Basic Glitch," a pun on "basic bitch." My gratitude to Legacy Russell for the critical context she quickly offered on the misogyny of the term, which caricatures straight cis white women as tacky, shallow consumers. To riff on that sexist phrase in a discussion of the work of a queer Black woman was particularly off-key.