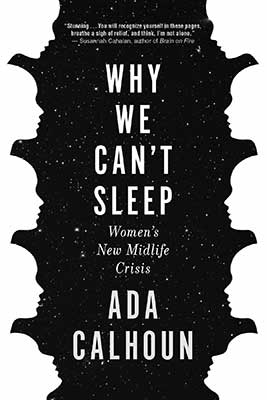 Hi. My name is Jessica. I am in my mid-forties, married with three kids, with a writing career that has been whittled down to a freelance toothpick. I’ve reached a stage of my life that is marked by daytime exhaustion, nighttime insomnia, and around-the-clock anxiety. When I exercise, I get old-lady injuries that leave me unable to hook my bra. I think about edibles and injectables a lot. I’m always looking for the thing (melatonin? microdosing? mental breakdown?) that will make my #blessed life feel less like a punishing grind. Nutshell, I’m a grade A basic bitch perfect reader for Why We Can’t Sleep: Women’s New Midlife Crisis by Ada Calhoun (which I primarily read during bouts of insomnia while my narcoleptic husband snored beside me). The embryo of this book was Calhoun’s 2017 article in Oprah magazine, which was hotly texted around like babysitter contact info among my mom friends in Los Angeles. We read it with recognition and a sense of dread, and then texted each other stressface emojis and wine emojis and gun emojis.

Calhoun’s devastating (but validating) thesis is that Generation X women have reached mid-life, and we are screwed. The Pew Research Center deems those born from 1965 to 1980 as Gen Xers, the neglected middle child between attention-hog Baby Boomers (1946–1964) and limelight-stealing Millennials (1981–1996). After reading the damning statistics in Calhoun’s book, I see that the women of Generation X are victims of bad timing. We were born riding the second wave of the feminist movement, fully confident that we could (and must!) do anything the boys were doing. Our parents divorced at record-high rates, leaving us without foundational stability and college funds. Our teenage experiments with drugs and sex were overshadowed by scary letters like DARE and MADD and AIDS. We graduated high school to see college tuitions rise 260 percent. We entered the workforce, just as stock markets crashed and dot-com bubbles burst. We focused on our careers, putting off childbirth until our thirties or forties (we must do it all!) and were faced with an infertility epidemic that should have been biologically obvious. Our kids have higher rates of ADHD and autism, and because we pushed the timeline for careers, we are raising our special needs kids and taking care of our aging parents at the same time. “Generation X women ... were an experiment in crafting a higher-achieving, more fulfilled, more well-rounded version of the American woman,” says Calhoun. “In midlife many of us find that the experiment is largely a failure.”

Where did it all go wrong? Let’s start at the very beginning—our childhoods. Kimberly Konkel, a childhood-trauma expert in the field of public health, told Calhoun that Generation X may be the “least parented” generation—“more than other generations, left to fend for itself without clear rules, community support, or adult supervision.” Our mothers worked outside the home in greater numbers than ever before, perhaps because of divorce or just the second wave call to work. Calhoun says that the higher the parents’ education level, the more likely kids were to come home after school to an empty house, except for the microwave and MTV. This rings very true—just think of Gen X narratives like E.T., The Goonies, Risky Business, and the mother of them all, Home Alone, where kids are confronting VERY SCARY THINGS with nary a parent in sight. My husband was a latchkey kid who would walk home alone from first grade, make himself a snack and watch The Waltons for company until his mom came home at dinner. Even if you had a stay-at-home parent, there was a much more laissez-faire (and parental sanity-saving) approach to childcare back then. My mom was usually home after school —but there were also times when she would just leave a sleeping bag on our screened-in porch in the dead of North Dakota winter for when she was not home. I’d climb inside in my Moon boots and snow pants and read Garfield comics until her Mercury Topaz pulled into the driveway.

Contrast that to my children, who are shuttled via a temperature-controlled SUV filled with Goldfish crackers and never-ending bottles of ice water. (Do you remember ever drinking water in your childhood? I don’t.) “According to the Pew Research Center, in 1965 mothers spent nine hours a week on paid work and ten hours on child care. In 2016, mothers spent twenty-five hours on paid work and fourteen on child care,” says Calhoun. So, even though our time at work nearly tripled, we still manage to pack in more time for the kids. Of course, we are “helicopter parents,” competitively obsessed with baby-wearing, co-sleeping, and acting as human shields for our children’s pain. (In contrast, Millennial parents are said to be “drone parents,” learning from our mistakes and watching from a more respectable distance.) Maybe we are overcorrecting based on our free-range (or, perhaps more accurately, wildling) childhoods. Calhoun states that, compared to 1975, spouses are spending far less time alone together, but doing almost three times as much parenting. “Maybe that’s why Gen X parents often complain that midlife marriage can feel like running a daycare center with someone you used to date.” Oof, that one hits close to the bone.

Well, at least we should be killing it in our careers, considering the equal opportunities we’ve been granted, right? Calhoun says, “Yes, women went into the workforce, but without any significant change to gender roles at home, to paidleave laws ... We bear financial responsibilities that men had in the old days while still saddled with traditional caregiving duties. We generally incur this double whammy precisely while hitting peak stress in both our careers and child-raising—in our forties, at an age when most of our mothers and grandmothers were already empty nesters.” Studies show that work is good for women’s mental health except when there are young children at home (this doesn’t affect men). Women who take just one year off to take care of a young child make 39 percent less than women who stay in the workforce over fifteen years. Add to that the possibility that a woman will have to leave the labor force early to care for an aging parent, which means lost wages and benefits averaging $324,000 over her lifetime, according to a 2011 MetLife study. Claudia Goldin, former president of the American Economic Association, reported that women’s earnings start out being roughly equal to men’s but then diverge as the women start juggling home and family. The solution to this inequity, she writes, “must involve changes in the labor market, especially how jobs are structured and remunerated to enhance temporal flexibility.”

One could argue that these work/family dynamics affect women of all generations, which is true, but as usual, things are a bit bleaker for Gen X. Just as we age into more senior management positions in our careers, those positions are disappearing; the past twenty years has seen a flattening of corporate hierarchies, according to the National Bureau of Economic Research. Calhoun writes, “Gen X women find themselves competing in middle age with both younger and older workers. In 2011, the Center for Work-Life Policy called Gen X the ‘wrong place, wrong time’ generation: ‘thwarted by boomers who can’t afford to retire and threatened by the prospect of leapfrogging Millennials.’”

To hit the final nail into our collective coffin, we are in our forties and fifties, so there is the issue of menopause and perimenopause to discuss. Menopause isn’t fun for any generation of women, but it just so happens that Gen X women are experiencing this glorious change of life (i.e., hot flashes, mood fluctuations, sleeplessness, weight gain, depression, you name it!) right at the time when the only proven treatment for it (hormone replacement therapy or HRT) is bogged down by largely false fears of cancer and strokes. Women are too scared to try hormones, so instead we turn to Gwyneth Paltrow to sell us mushroom dust or jade eggs. We turn to alcohol, which definitely doesn’t help the sleeplessness, or Zoloft, which doesn’t help with weight gain or your sex drive. We turn to our phones and google “how to sleep.” People bitch about Millennials and their smartphones, but it’s actually Gen X who are the most addicted to social media, spending almost seven hours a week on it, forty minutes more than Millennials. We are swayed by advertising more than other generations, too, probably because we were raised by our televisions.

While I think the research in this book is sound, this is not a wonky, definitive examination of social systems from an academic perspective—it’s women’s personal narratives, sprinkled with studies. Calhoun gets around the issue of racism and classism by saying she spoke to women of all stripes from all over the country, and I guess we are supposed to take her word for it, as she doesn’t identify these women by their demographics. But does it matter really? This book is, in its essence, a more fleshed-out version of a really good women’s magazine “trend piece.” It’s a book that puts our agony in a neat framework, like Jennifer Senior’s 2014 book about parenting, All Joy and No Fun (which was also a product of a really good magazine article). Consequently, Calhoun is shining a light on something, but not really offering us a way out of the darkness. She says that the process of writing this book, specifically talking to women and hearing them echo her anxieties and disappointments, helped her find her way through her mid-life difficulties. She found safety in numbers and suggests that Gen X women cultivate interest-based social groups where they can vent and relate to each other. Cool, cool, cool—but what if your kids are young, or have special needs, or maybe you have more than one of them? (Calhoun has one kid who is in middle school.) Socializing, for me, is making coffee plans with a friend a month in advance, and then cancelling it the day of because of Hand, Foot and Mouth Disease.

I’m going to file away the “more socializing” tip for coming years, but for now, I’m more likely to vibe with her other suggestion, which was basically “play the hand you were dealt.” Calhoun describes a therapist in Atlanta encouraging women to find a way to take life as it is, not as you thought it would be. “It’s one of the hardest things,” the therapist says, “to radically accept what’s in front of you.” Calhoun writes, “It should be plenty to raise children or to have a career—or, frankly, just not to become a serial killer.” Radical acceptance means turning off the aspirations to do everything, perfectly, all at once, like we were supposed to do. For now, I’m just going to take comfort in the fact that I’m not a serial killer. Yet.

Jessica Baumgardner is a writer and editor in LA. Her last piece for the WRB was about Lindy West’s The Witches Are Coming.