Women and Other Monsters: Building a New Mythology By Jess Zimmerman 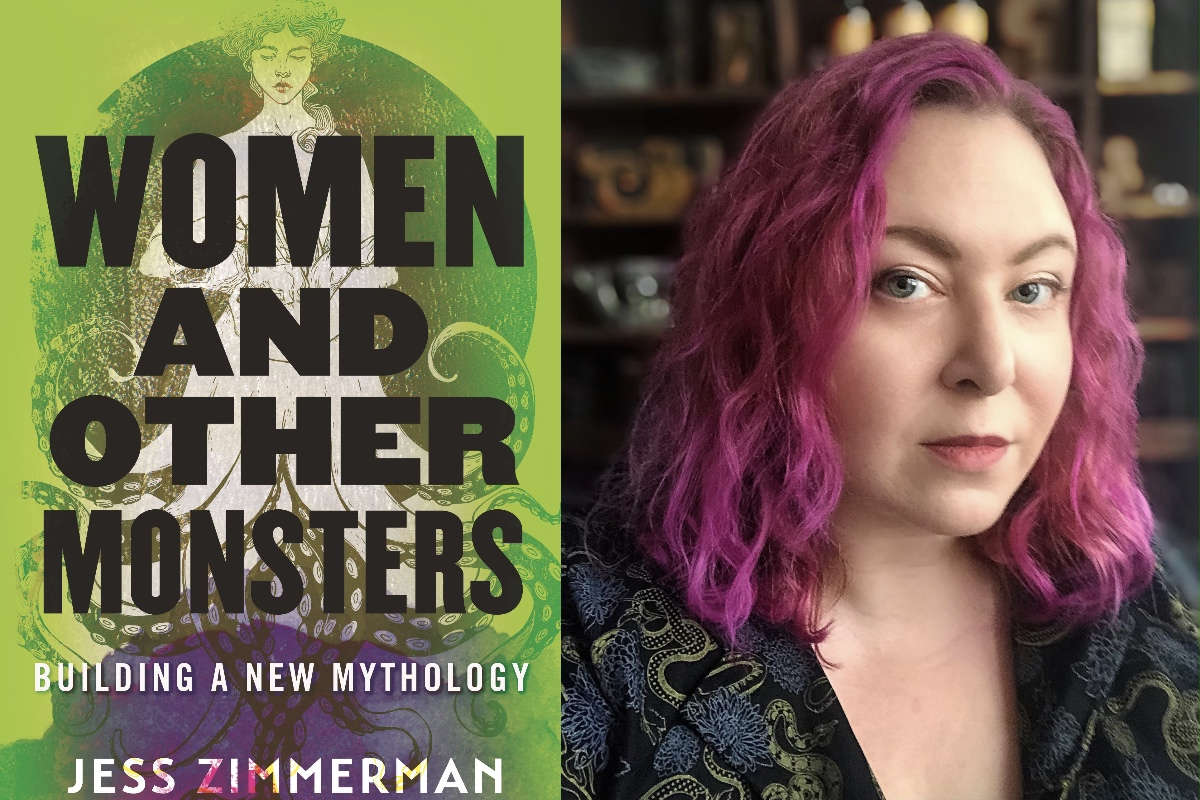 Reclamation has been a vital feminist tool since the 1970s. That decade saw the dawn of scholarship seeking to pry open the vise-grip of masculinist history—all too often presented with biases both deliberate and unconscious that rendered it hisstory—to reveal the herstory hidden therein. Combined with efforts at re-purposing such slurs as “bitch” and “slut” to transform them from hurtful utterances to statements of pride, these processes of claiming something back or reasserting a right have been crucial to resisting and even poking fun at the dominant patriarchal culture for half a century.

In her concise, intellectually and emotionally engaging Women and Other Monsters: Building a New Mythology, Jess Zimmerman reaffirms the strategy of reclamation with all the wit and intersectionality that befit the twenty-first century. Signposting the book’s inclusivity, Zimmerman expressly states that she’s using the word “women” “in its broadest possible sense,” acknowledging the additional oppressions trans women and nonbinary people face, while pointing out that men, too, might find much to learn in these pages, considering how an inherently misogynistic society all too often insults them by comparing them to women, suggesting that “their anger or sadness or sexuality was somehow too feminine.”

The editor-in-chief of Electric Literature, Zimmerman is the co-author with Jaya Saxena of the 2017 book Basic Witches: How to Summon Success, Banish Drama, and Raise Hell with Your Coven. Long a proponent of how feminism can ally itself with the weird and the occult to achieve a higher degree of empowerment, as well as how revisiting hell-raising women of the past can yield a more liberated present and future, Zimmerman extends that advocacy here.

Born from a series of essays originally published at Catapult, these chapters see Zimmerman presenting a lively reassessment of eleven well-known female monsters, including Medusa, Charybdis and Scylla (who each get their own section), the Sirens, and the Harpies, all the while inviting readers to explore what feminism could achieve were it to transform into something more audaciously monstrous. In other words, she aims to “rehabilitate these monsters—not externally, like the (male) artists who gradually made their forms more pleasing and symmetrical, but by showing how the traits we were told made them dangerous are actually their greatest strengths, and ours.”

If you grew up, like I did—and like Zimmerman did, for that matter—obsessively reading and rereading such classics as D’Aulaires’ Book of Greek Myths, Zimmerman’s book is a thrill. “Mythology obsessives are a powerful demographic” she notes. But even if you’re a relative mythology novice, Zimmerman’s expansive and inviting critiques will likely capture your interest. As she says herself in her “Note to the Reader,” she’s not a classicist, and her intention “isn’t to offer the most authentic interpretation of these monsters. In some (probably most) cases, their metaphorical weight in the book will be different from the role they played in ancient Greek society. Here, their image, as it survives today, is being used as a framework for discussing women’s current-day cultural role.”

… an ecstatic ode to the potential transgression and power of ugliness, ugliness not hidden and shamed but flaunted and embraced.

Each chapter opens with an illustration by Samira Ingold in an arresting, black-and-white style reminiscent of Art Nouveau. The strength and boldness of the images harmonize with Zimmerman’s recuperative assembly of a new mythology. Like Del and Sofia Samatar’s Monster Portraits or Madeline Miller’s Circe, Zimmerman simultaneously entertains her readers with the reanimation of familiar stories from the days of old while also situating these tales in a fresh and progressive contemporary frame.

Because of their origins as standalone essays, Zimmerman’s chapters meander pleasingly, rove widely, and put her own voice in conversation with a dazzling pantheon of other thinkers, phenomena, and cultural artifacts, from Umberto Eco to Kim Kardashian, from Homer to the Minnesota Starvation Experiment, from C.S. Lewis to the Museum of Pathological Anatomy, from the Old Testament to Alicia Silverstone in the Aerosmith video for “Crazy.”

The first entry, “To Turn Men to Stone,” provides a sense of how Zimmerman’s rangy yet incisive approach to each of these monstrous women operates. First, she gives a crash course in the myth of the Gorgons, particularly Medusa, but with zero sugar-coating, noting that initially—before the scalp rife with snakes and the powers of petrification—Medusa was a regular woman, albeit with beautiful hair, hair so beautiful that it turned the head of Poseidon. “Some mealy-mouthed translators refer to what happened next as Medusa being ‘ravished’ or even ‘rifled,’” she writes, “but let’s be clear: Poseidon liked her hair, so he raped her.”

From there, Zimmerman braids in (hair pun intended) a number of personal details from her youth and coming of age, unsparingly critiquing her own body along the way—its fatness, its thin frizzy locks, its thick ankles, its big feet—through the harsh lens of the male gaze. In doing so, she shows that she understands that while she’s not the ideal, neither is she hideous, “But for women, the ‘correct’ form is so narrowly defined that almost anyone’s physical form can be deviant. We don’t have to have two heads to be monstrous. It’s enough to have two chins.” These various lines of interpretation mingle and mesh, gradually building to an ecstatic ode to the potential transgression and power of ugliness, ugliness not hidden and shamed but flaunted and embraced. This chapter concludes: " Whatever our monstrous new heroine looks like, whatever armor she wears, she too will carry the Gorgon’s head on her shield. Ugliness for protection, and for bravery, and for defense. Ugliness for visibility, for forcing people to meet your eyes, for making them freeze and shiver when they do. Ugliness for an infinity of options, a universe unconstrained by any desire except your own."

Throughout, Zimmerman does something similar for each of her chosen subjects, including the Sphinx, a figure she holds up as the male-produced symbol of the preternaturally wise woman who can be easily bested by a regular man, and who will also do that man the courtesy of self-undermining. As it’s typically presented, she notes, the myth of Oedipus suggests that this woman—monstrous not just for her bizarre body, but for her supposedly freakish knowledge—“will not only lose her position of power but renounce it.” Seen in this light, Zimmerman makes the case that this tale is really “a fantasy of petty revenge.”

Virtually every page is packed with fun facts, not in the sense of trivia—for each item feels carefully selected to enhance her argument—but in the sense of little nuggets of data that are a pleasure to learn. In her chapter on the Furies, for instance, she points out that these creatures are often referred to as the Eumenides, meaning the Kindly Ones, a dodge intended to protect the person referring to them from their wrath, and that “The words ‘euphemism’ and Eumenides share a root: eu-, for ‘good.’” And in the chapter “Deep Houses” she writes with characteristic humor that the term chimera “survives to mean anything made of disparate parts: an aggregate creature or machine, an impossible idea, a fantastical beast. Hippogriffs and manticores would be small-c chimeras. A hacked-together computer could be a chimera. So could a Cronut.”

Zimmerman’s writing wears its research lightly and her tone, though unapologetically erudite, remains conversational and welcoming, free of jargon or academic smugness. But make no mistake about the extensive scholarship underlying each piece. Her formidable works cited could serve as the syllabus for an intense graduate school class, exhibiting an energetic engagement with other experts on these subjects ranging from such canonical standbys as Hesiod, Ovid, and Vergil to such latter-day monster studies specialists as Jeffrey Jerome Cohen, as well as such contemporary fellow authors and cultural critics as Margaret Atwood, Mikki Kendall, and Lindy West.

Beacon Press, the non-profit publisher that is an arm of the Unitarian Universalists, serves as an ideal home for such a book, given that their mission is to “change the way readers think about fundamental issues” and to “promote such values as freedom of speech and thought; diversity, religious pluralism, and anti-racism; and respect for diversity in all areas of life.” Zimmermann’s own mission aligns harmoniously, as the questions she poses have the potential to change not just what her readers might think, but possibly how they might act, as in the chapter on the Hydra, where she asks: “But as with most manifestations of misogyny, the question isn’t who’s making the demands. The question is who benefits. Who is served by keeping women at odds with each other? What happens when we refuse?”

Observing each of these figures from Greek antiquity, Zimmerman reveals “how they function as tight little packages of expectation seeded into the culture and how they can be subverted.” In her own explanation of the hybrid power of monstrousness, Incubation: A Space for Monsters, the poet Bhanu Kapil writes that, “The monster is always itinerant.” Roving across place and art and time, Women and Other Monsters offers a fittingly wayfaring exploration of the many feminist lessons that monsters have to teach us.