Women's Liberation! Feminist Writings that Inspired a Revolution & Still Can

While Shulman and Moore aim to capture a diversity of perspectives and preoccupations, certain themes and tensions emerge. 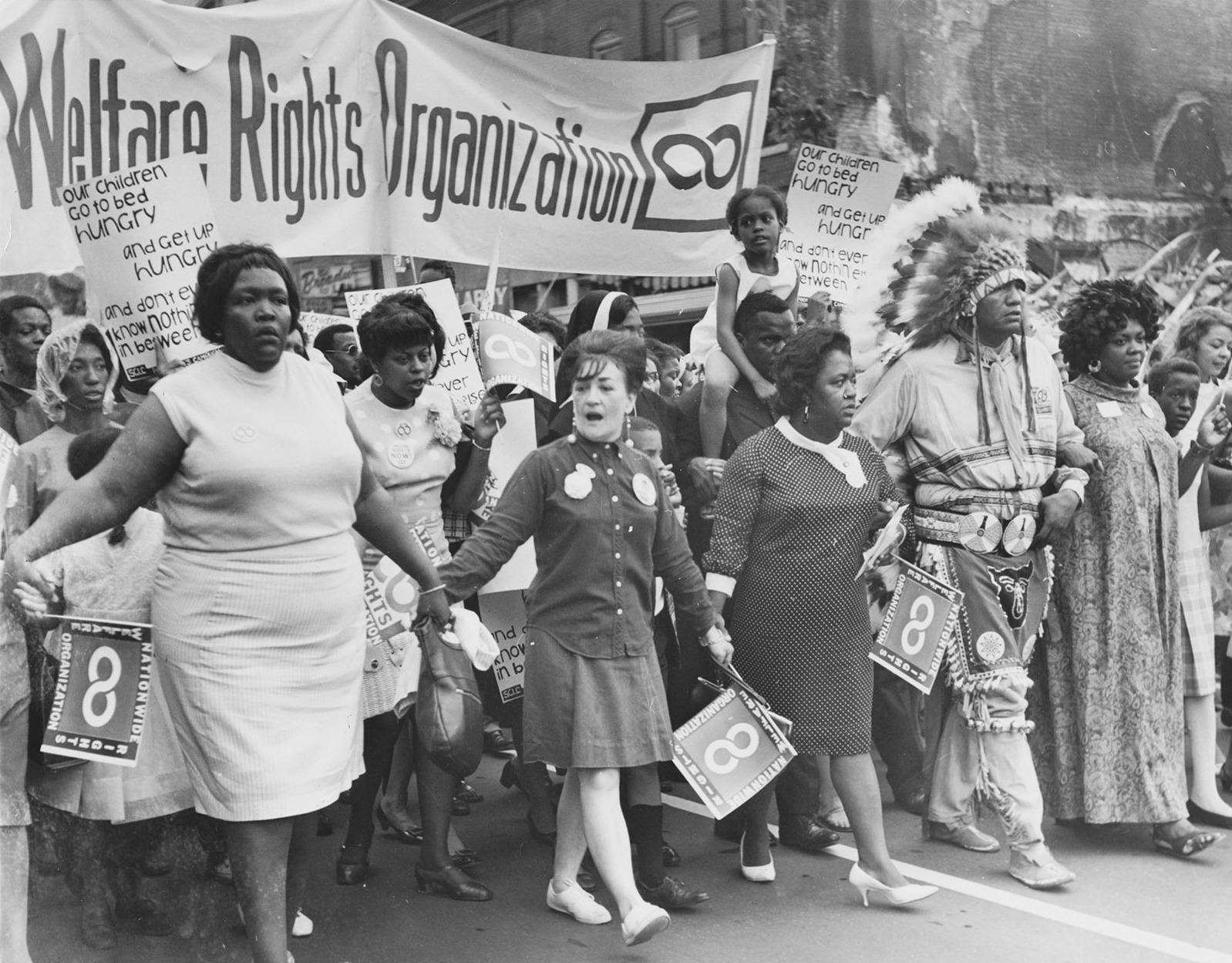 Johnnie Tillmon (front left) marching with The National Welfare Rights Organization in the Poor Peoples Campaign, Washington DC, 1968. Photo by Jack Rottier.Sometimes I think I have an avoidant relationship with second-wave feminism. In recent years the failures and bigotries of the white bourgeois second wave have been vocally scrutinized. As a white, cis, anti-capitalist woman who aspires towards ever more intersectional thinking, I have my own baggage with the movement that made great strides toward equality and representation in a system that remains fundamentally white supremacist, gender-essentialist, and economically stratified. At the same time, I’m aware that I’m ignorant, that I know only the general contours. My baby boomer mother was not a feminist. I became one as a teenager in the early aughts while listening to my older sister’s Ani DiFranco CDs in secret in our Evangelical household. And lately I’ve wondered whether I persist in my hazy understanding of the second wave out of a sense of impossible indebtedness. Those women fought to give me the freedom to live this life that I’ve mostly squandered on useless master’s degrees and narcissistic men. I don’t want to hear about their struggle any more than I want to hear about my mother’s labor pains.

So, when I agreed to review Women’s Liberation! Feminist Writings That Inspired a Revolution & Still Can, the Library of America anthology of radical second-wave activist writing, I did so not as an expert but as someone seeking a workout in feminist history and theory. Workout indeed! Edited by the writers Alix Kates Shulman and Honor Moore, the anthology is nearly six hundred pages, containing ninety pieces spanning three decades. It’s a record of a multifaceted movement that by turns shocked, informed, chastened, validated, and empowered me. Most of all it made clear as day that it is by speaking and listening to each other’s stories—within and between generations—that we achieve and sustain the radical vision of ourselves as an exploited class within a larger and more complex system of exploitation which we can only overthrow through solidarity. As Carol Hanisch put it (in what I had only known as a slogan but learned from this book is the title of a 1969 essay in defense of consciousness-raising groups), “the personal is political.”

Despite the collection’s breadth and diversity, Shulman and Moore present a surprisingly coherent narrative, beginning with The Feminine Mystique (1963) and moving quickly into the late sixties, during which the liberal feminism of Betty Friedan and NOW was challenged by a more diverse cadre of activists informed by other New Left movements. Women’s liberation, as this more radical streak became known, broadened feminism’s base and goals through the proliferation of autonomous groups around the country dedicated to raising feminist consciousness through “rap sessions” and publishing; organizing strikes, demonstrations, and speakouts; and providing community services such as healthcare, childcare, and domestic violence resources. Women’s Liberation! contains manifestos, analyses, and polemics from many of these organizations—originally published via newsletters, mimeographed pamphlets, and the emergent crop of feminist journals and small presses—including New York Radical Women, Radicalesbians, La Raza, the Boston Women’s Health Collective, The Combahee River Collective, and many more. While these groups diverged (and sometimes conflicted) in terms of racial, ethnic, and class composition, sexuality, political outlook, and even concrete objectives, the editors argue that they shared the goal of creating a mass movement “to transform power relations between the sexes and thus revolutionize society.” 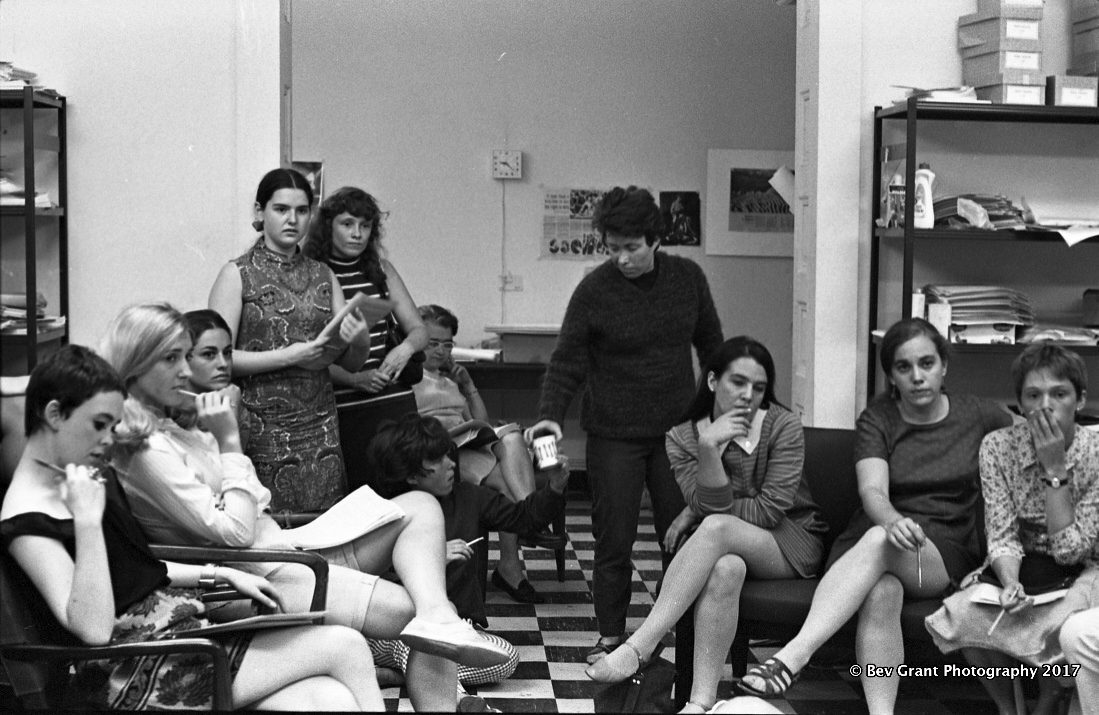 New York Radical Women at a 1968 consciousness-raising meeting. Kathie Sarachild, who coined the slogan "Sisterhood is powerful," is at the far right. Photo by and courtesy of Bev Grant.One of the stated goals here is to correct the misconception of second-wave feminism as a monolithically white and middle-class movement. Though the term “intersectionality” was not coined until 1989, the theme is apparent in much of this literature. Some of the earliest proponents of women’s liberation, both white and Black, began their activist careers in the civil rights movement: Casey Hayden and Mary King, disturbed by the sexism they encountered in the Student Non-Violent Coordinating Committee (SNCC), authored a 1965 manifesto in which they compare and contrast sex and “caste.” Frances M. Beal, also a veteran of SNCC, authored a foundational 1969 pamphlet coining the term “double jeopardy” to describe the unique exploitation of Black women, demanding that white feminist groups adopt antiracist, anti-capitalist agendas. The evolution of this proto-intersectional consciousness is articulated famously in the Combahee River Collective’s discussion of “interlocking oppressions” (1977), and beyond.

While this anthology makes clear that Black and “third-world” feminist activists and organizations were integral, activists of color were often disappointed by and called out the racism of their white counterparts. In 1979, asked to address the National Women’s Studies Association Conference, Barbara Smith took the opportunity to critique racist attitudes within the emergent discipline of women’s studies. In that speech, Smith defines feminism in a way that continues to hold us all to account: “the political theory and practice that struggles to free all women … anything less than this vision of total freedom is not feminism, but merely female self-aggrandizement.”

Intra-feminist conflict over sexual identity and practice is another theme. Many hetero and moderate feminists resented the “lavender menace,” Friedan’s slur for the lesbian contingency whose interests she feared would drag down the movement as a whole. Meanwhile, some radicals took the opposite approach, advocating same-sex relationships as a means of establishing sisterhood and finding intimacy unmarred by heterosexism. In a 1970 pamphlet, Radicalesbians advanced lesbianism as a means for women to forge new identities “with reference to ourselves, and not in relation to men.” Two years later, Furies cofounder Charlotte Bunch, in a “theoretical manifesto” for lesbian separatism, defined lesbianism as a “political choice.”

Lesbian separatism is one example of how these documents, particularly from the early movement, demonstrate (for this millennial feminist) the alterity of the past. In the wild ideological ferment of the late sixties, you sense profound anger, a desire to disempower patriarchy through provocation, and also a very serious struggle—among women of all demographics—to achieve financial and social independence. The stakes of this struggle were real, but no ideas were off the table. Sylvia Federici advocated wages for housework. Johnnie Tillmon, a leader of the welfare rights movement, compared the welfare system to an abusive marriage and called for “Guaranteed Adequate Income.” Activists discussed ways to free themselves from sexual as well as economic domination. Lesbianism was one. Cell 16 cofounder Dana Densmore advocated celibacy as a separatist tactic. Meanwhile, sexologist Anne Koedt’s “The Myth of the Vaginal Orgasm” (1968) celebrated the clitoris as a tool for women’s revolutionary independence. 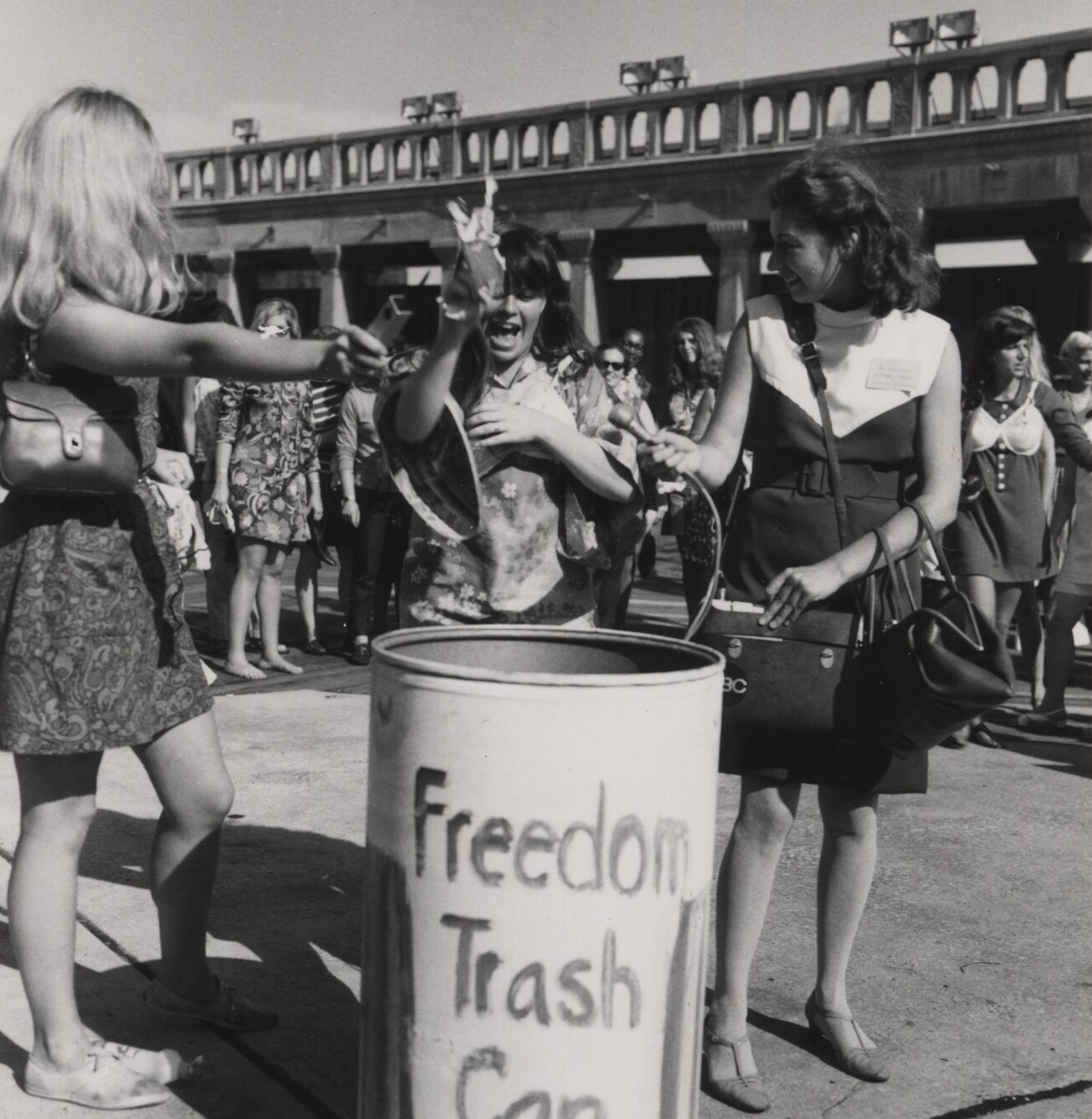 Protesters discarding bras, brooms, and other "instruments of female torture" at the 1968 Miss America Pageant protest in Atlantic City. Contrary to legend, no bras were burned. Photo courtesy of Alix Kates Shulman.In the juxtaposition of celibacy and sexual liberation, we see an inkling of what would become one of the movement’s most profound internal conflicts: sex-positive versus sex-negative feminism. While writers like Firestone and Susan Griffin famously theorized the inherent exploitativeness of heterosexual dynamics under patriarchy, there were differing conclusions about the extent to which women can live fully liberated lives while seeking sex with men. As Shulman and Moore frame it, this longstanding internal tension, combined with the external stress of the cultural backlash in the 1980s, culminated in the so-called “sex wars,” the high-profile internecine conflict between Women Against Pornography and pro-sexual liberation, anti-censorship feminists who opposed the notion that porn—and heterosexual sex generally—were inherently violent. Meanwhile the most thoughtful and eloquent thinkers of the period, like bell hooks, recognized that sex could only be truly liberated “through the ending of female sexual oppression.” In 2021 the idea of a porn ban seems almost comically antiquated, and yet, this dichotomy of sexual thinking is, in some ways, more relevant than ever in the #MeToo era.

In an essay that became the first cover story for Ms., Jane O’Reilly uses the term “click” moments: epiphanies in which women suddenly see themselves as part of a subordinate class. While reading this book I had far more “click” moments than I’m able to relay here. Your click moments will be different from mine, and there is more to this anthology than I can communicate from my limited subjectivity. In the end what resonated most was the emphasis on what the movement called “consciousness-raising,” which took place not only through publishing but also in small groups where women shared their “forbidden truths or private humiliations” as jumping-off points for study and action. The dismantling of taboos and patriarchal myths through personal testimony is the same logic that powers #MeToo, but as I read the words of so many women empowered through actual in-person groups dedicated to, as Kathie Sarachild put it, “studying the whole gamut of women’s lives, starting with the full reality of one’s own,” I started to wonder (and maybe this is quarantine talking) if the internet is really sufficient.

Since the early days of the movement, anthologies have provided another important channel for consciousness-raising: for example, Sisterhood Is Powerful and The Black Woman (both 1970), This Bridge Called my Back (1981), and Home Girls (1983) collected radical writings for widespread consumption and demonstrated how integral the work of radical women of color was to the movement. Anthologies can also pass down the lessons of previous movements to successive ones. Moore writes in the introduction of Women’s Liberation! about an encounter with a young woman she met at a reading for an anthology of poetry from the second wave: “That was awesome,” the woman said, “We have to start a revolution.” The woman’s ignorance “reminded me,” Moore writes, “of my own ignorance, as a young feminist, of the women’s suffrage movement.”

This anthology narrates the creation of language for describing reality—sexism, sexual harassment, marital rape, date rape, sisterhood, etc.—concepts that have become so commonplace we forget their origin. As I read the final excerpt, from Susan Faludi’s Backlash (1991), which discusses the cultural hostility that effectively ended the second wave, I began to recognize the culture I grew up in, where the prevailing discourse was that women had all the equality they could wish for, except that feminism had turned them into unhappy spinsters. It was only reading this now—at thirty, left suddenly single in late 2019 by the controlling womanizer to whom I had devoted the better part of my twenties, in my late-pandemic malaise, having just read this anthology—that I realized how much I have internalized that discourse. Most days I still wish that man had married me. How can any of us face this future alone?

I read the last paragraph of the book, which begins, “The meaning of the word ‘feminist’ has not really changed since it first appeared in a book review in … 1895, describing a woman who ‘has in her the capacity of fighting her way back to independence.’” Not necessarily a groundbreaking insight, not even a radical one, just one that came to me when I needed it from deep herstory. That was awesome, I thought as I turned the last page. We have to start a revolution.

Charis Caputo is an MFA candidate in NYU’s Creative Writing Program and Assistant Editor of Women’s Review of Books. She holds an MA in History from Loyola University Chicago.