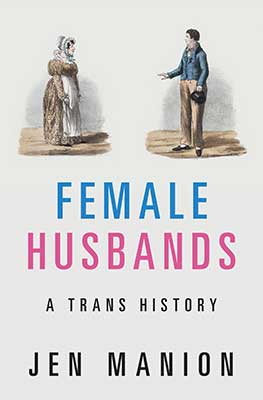 On July 16, 1746, a gregarious traveling quack doctor by the name of Charles Hamilton married Mary Price in Wells, England. After nearly two months of marriage, Price reported her husband to the authorities with a startling claim: She had only just discovered that Hamilton was not a man.

The story raises a myriad of questions. How did Hamilton, assigned female at birth, come to live and work as a man? Why did Hamilton, despite the risks of being outed by an intimate partner, decide to get married anyway? How could Price claim not to have known, despite having been sexually involved with her husband for two months? Jen Manion handles these questions with genuine care and thoughtful attention in Female Husbands: A Trans History. Though the eighteenth-century press viewed Hamilton with a sort of fascinated anxiety, in Female Husbands, we are treated to a version of the story that sees Hamilton as a sympathetic subject rather than an object of curiosity. Manion’s thorough historical research reveals that Hamilton’s choices were likely shaped as much by social and economic constraints as they were by sexuality or gender identity. Hamilton’s profession, for instance, allowed for more freedom and mobility than the occupations available to women. With manhood came the ability to travel alone and unsupervised, and it opened up economic opportunities that would have been foreclosed to women. At the same time, such a life also risked loneliness and isolation; any intimacy Hamilton indulged in had the potential to disclose their sex and thereby jeopardize their social standing.

Indeed, the result of Price’s complaint against Hamilton was a harsh and fairly straightforward punishment: six months of hard labor and humiliating public whippings. But the question of what Hamilton was being punished for was far less straightforward. Court records show that there was debate over what to call Hamilton’s crime, as well as over what the crime actually was in the first place. What was most troubling to the court, it seems, was Hamilton’s ability to please their wife sexually, with some combination of know-how and subterfuge such that Price found nothing in their intimacies to suggest that her husband might not be sexed male. Hamilton’s apparent success at embodying and performing the role of a husband was subsequently punished under the Vagrancy Act of 1744, a law intended to maintain order, often by punishing those who transgressed gender and sexual norms. Hamilton, along with the other gender-crossing figures in the book, is described as “transing” gender, a term that Manion describes in this way: “To say someone ‘transed’ or was ‘transing’ gender signifies a process or practice without claiming to understand what it meant to that person or asserting any kind of fixed identity on them. In this way, we might view the subjects of this book as traveling through life, establishing an ongoing and ever-unfolding relationship with gender, rather than viewing them as simply shifting between two unchanging binaries.”

The body of research represented in this book is impressive in its scope. Manion guides us through a truly vast amount of historical documentation, including newspapers, court records, and other printed materials from 1746 to 1910. Manion meticulously reassembles the life stories of well over a dozen female-assigned individuals who lived, worked, and in some cases got married, as men. The most impactful feature of the book, though, is that, despite the fact that historical records “usually mock and trivialize” those who challenged the expectations of their assigned sex, Manion nonetheless hopes that “by reading against the grain and approaching the material and above all the subjects with compassion, we can see the full humanity and vulnerability of those who have gone before us.” This book’s trans history might not, as Manion puts it, “tell a feel-good story,” but Manion’s skill and care as a narrator of this story is palpable throughout the book. In Female Husbands, these figures from the historical past are shown to be complex, often ingenious individuals who labored to maintain the stability of their various social and economic positions and proved resilient when their lives and bodies were placed under public scrutiny.

Manion’s book is readable and narrative; it manages to be both easily accessible to a casual reader and enlightening for a scholar of trans and queer history. We learn how transing gender was negotiated, talked about, and understood in the context of its particular historical moment. We also learn about the evolution of gender and sex more broadly, as Manion tracks changing ideas about what separates women from men, and what constitutes a punishable transgression of the gender binary.

She pieces together this history of trans lives from an abundance of archival documents, but the book also attends to the things that are missing from the historical record. Manion limns these gaps in the archive with compelling, informed speculation. In reference to James Howe, a respected tavernkeeper who was blackmailed into returning to life as a woman after living for decades as a man, Manion speculates, “What motivated Howe to live as a man? The answer given in the press to this question must be read with skepticism. It may have been made up by the person writing the news story. It may have been manipulated strategically by Howe after they were outed. It may have been the truth.” Another recurring absence in the history of female husbands are the motivations and experiences of the female wives who married them. In the case of James Allen, who was accidentally killed while working for an English ship-builder in 1829, for instance, Allen’s widow Abigail was forced to attest that she lacked any knowledge of her husband’s assigned sex. Abigail’s declaration of ignorance was likely motivated by concern for her own safety as well as financial difficulty, as her testimony appears to have helped her to avoid social abuse and to procure the insurance money she desperately needed following the death of her husband. This erasure of what Abigail might have known or felt for her husband effectively overwrites the possibility of sexual intimacy between the two, leaving a hole in the historical record of James and Abigail Allen’s marriage. As Manion points out, “From the perspective of queer and trans history, acceptance of the notion that these relationships were asexual had a devastating function by erasing the significance of sexual intimacy and emphasizing a husband’s inability to satisfy their wife.”

Manion is thus attuned to the limitations of the historical record and language to accurately represent trans lives. Naturally, this requires addressing the ways in which gendered language was used in the press to depict those who transed gender. Even the simple choice of which pronouns to use to describe a person could become a source of contention, as when the coroner examining James Allen’s body avowed, “I call the deceased ‘he,’ because I considered it impossible for him to be a woman, as he had a wife.” Female Husbands refuses to assign these subjects a singular gendered pronoun when describing them, instead opting to refer to the subjects of the book with the gender-neutral pronouns “they” and “them.” This practice highlights the limitations of gendered pronouns for representing individuals whose lives often moved “across and in-between gender roles in a space we simply don’t have adequate language for.”

Furthermore, Manion’s close attention to the language of the press reveals far more than the insufficiency of a binary system of gender. This is nowhere more evident than in the story of Charles Williams, a maritime laborer who came to the attention of the press during the early nineteenth century. At this time, newspapers commonly filled their pages with stories of “female sailors” who transed gender and sought employment at sea. Importantly, Williams’s story was circulated in relation to the attention-grabbing term “female sailor,” which would have been familiar to readers of the period, but every version of Williams’ story was quick to identify Williams as black. The unavoidable fact that race was insistently foregrounded in accounts of Williams’s life signals that the “female sailor” was, in Manion’s words, “fundamentally and implicitly a category bounded by whiteness, reserved for and used to describe the kinds of freedom that white people assigned female achieved when they passed as white men.” The term “female husband” was used in a similar way to refer to an implicitly white form of masculinity and mobility. The history of transing gender in the US and UK, in other words, cannot be written without accounting for the ways in which colonialism, racism, and the construction of whiteness are inextricable from gendered social norms and even gendered language throughout this history.

Female Husbands offers a nuanced survey of both famed and forgotten figures in the history of transing gender. As a trans reader myself, I turned the pages of this book with a growing sense of relief. In negotiating my own gender identity and expression, I have frequently been in the position to feel as though I have run afoul of the rules of gender, or that I have failed to live up to the social expectations of my own gender. As a result, seeing this expansive history of cross-gender identification come to life in Manion’s capable hands was a genuinely affecting experience. It is hard to remain anxious about living up to a gendered standard when faced with so much historical evidence to confirm that the language and rules of gender are and always have been idiosyncratic at best, and cruelly exclusionary at worst.

Manion’s firm belief that these stories can productively “confound our contemporary notions of gender identity” even as they “offer us a window onto our collective past—and future” is, in short, convincing. This book will jostle your assumptions about what constitutes gender and, further, how gender shapes and is shaped by history—exactly what Manion intends it to do.

James Yukiko Mulder is a Boston-based academic whose current book project focuses on trans history and seventeenth-century literature. He also has an article about rude noises, bad smells, and bodily orifices on the early modern British stage forthcoming in SEL: Studies of English Literature 1500-1900.