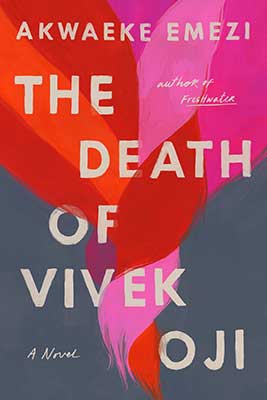 The very first chapter of The Death of Vivek Oji is a single sentence: “They burned down the market on the day Vivek Oji died.” On the next page, we meet Vivek’s father, Chika, and Chika’s mother, Ahunna. But where is Vivek? What has—or will—become of him? Nonbinary author Akwaeke Emezi holds off on answering these questions, weaving the story of a life rather than a singular event. Before we learn exactly what happened on the day the market burned, we must first know Chika and his wife, Kavita. We must know their nephew, Osita. We must know the foreign Nigerwives, local girls Elizabeth and Juju, religious Aunty Mary, and the Nigerian towns they all live in. Only then can we truly know Vivek and how he died.

The Death of Vivek Oji—Emezi’s second adult novel, following Freshwater in 2018—is a story told in hindsight, each character looking back at what has transpired. Chapters alternate in point of view: sometimes they are narrated in a sweeping thirdperson that follows the characters in their guilt or grieving; sometimes in Osita’s bewildered, mournful revelations about his relationship with his cousin; sometimes in short, whispering messages from Vivek himself, from beyond the grave. In the first chapter that he narrates, Vivek poses, “If nobody sees you, are you still there?” Even in life, he toes the line of transparency. He was born on the day his grandmother passed away and possesses the same scar she had on the bottom of her foot. “Birthdays and deathdays [are] all tangled up in each other,” Emezi writes, and Vivek stands with one leg on either side.

On one perfectly sunny day, Vivek remarks to Osita how loud the rain is. After stating that there is no rain, Osita notes: “when I touched the cotton of his shirt and the bone of his joint underneath, his eyes rolled up into the white and his body flopped sideways, falling against the mattress. ‘Oh,’ he said, and dropped his shoulders. Then, almost to himself: ‘This thing again.’” Thus marks the beginning of what Vivek flippantly refers to as “blackouts,” moments in which he seems transported to another place entirely, “walking as if he was drunk, staggering and stumbling, his lips moving slowly and soundlessly.” Some characters ponder the similarities between Vivek and his grandmother Ahunna, though they dismiss any idea of reincarnation decisively: “Vivek was a boy and not a girl…” And when he begins to grow his hair long, to “[look] like a prophet,” to adorn himself with his mother’s jewelry, the adults in his life continue to believe that his episodes are just that, that his strange behavior is only a phase—“the verge of a nervous breakdown”—and that one day he will realize the wrongness of his actions.

But Emezi does not allow that to happen. The Nigeria they brings us is one characterized not only by political turmoil, but also by powerful, tight-knit LGBT youth. Vivek, undoubtedly queer from the start, finds hope and community in his gay friends. Even Osita, who at first proclaims his disgust with Vivek’s lifestyle, later reveals his own struggles with sexuality. “Do you even know what I’m like?” Vivek challenges Osita at one point, though his words seem to be directed somewhere past his cousin; earlier, in his own narration, Vivek admits that “every day it was difficult, walking around and knowing that people saw me one way, knowing that they were wrong, so completely wrong, that the real me was invisible to them.” Their group of friends stands outside society in the same way that Vivek stands outside reality, outside life, and they cling fiercely to each other because of it. They may not share his near-clairvoyance, but they all possess the gift of seeing the unseen. Of understanding the existence of a vibrant, beautiful current running under their country’s surface.

The Death of Vivek Oji’s interlacing of queerness and fantasy provides important commentary on the indescribable beauty of our differences. Considering Vivek’s life, Osita recalls “when he danced and the girls danced with him and I thought, God forgive me, I really love him, I really do.” Emezi does little to condemn the taboos presented to the reader—cheating, violence, incest. They aim to remind us that there is light to be found, even in the face of horror. Among all the pain and tragedy, there is beauty, peace, and dancing.

Even so, clouds of great sorrow cover the skies. Vivek’s mother Kavita is inconsolable after his death, frantically searching for information everyone else seems to be withholding. “Her questions were real,” Emezi writes. “Who had returned Vivek’s body to their door? Who stripped off their child’s clothes, wrapped him in akwete, and delivered him like a parcel, like a gift, a bloody surprise? Who had broken his head?” At his burial, she watches a group of men kill a goat; she vomits. Death begets death; blood begets blood. This loss begets terrible, terrible suffering. As far as we can understand from the start, a boy has been lost to a world that did not understand him. But, as the story progresses, Emezi shows us again that there is more than meets the eye. No explanation can describe what has truly transpired. “The words had departed from their origins,” Kavita realizes in her mourning. “They were diluted, denatured.”

Is there an inherent tragedy in queerness? An inherent joy? Emezi asks us these questions and never truly gives a reply. What Emezi has created in The Death of Vivek Oji is an opportunity for the reader to cast their own judgments. Emezi has things to say on Vivek’s sexual and gender identity, certainly, just as they have things to say about his national, his ethnic (half-Nigerian, half-Indian), and his cultural identities. Still—as central as his death is to the book—we are never told, exactly, what it means that Vivek is dead. Does it mean anything at all, or is the end of his story just a sequence of accidents and regret?

I fell so deeply in love with his wit, mystery, and radical confidence; I couldn’t help but think that he deserved more, not only from society, but from the book professing itself to tell his story. Maybe I was meant to feel this frustration. Maybe Emezi wants the reader to know the fury brought about by senseless prejudice. Maybe, then, I am the one looking past the meaning. Even Vivek himself seems uncertain: “Perhaps I had just become the fulcrum, the point on which everything hinged, the turning. I don’t know.”

Which of the characters are supported? Which are pitied? How much will readers decide for themselves? In The Death of Vivek Oji, Emezi does not point one way. Among all the enigma and intrigue, though, is a doting portrait of queer, middle-class life in Nigeria, a love song for the outcasts. One of the author’s dedications at the end of the book reads, “To all the queer and gendervariant people back home, especially those making new worlds for us, jisie ike. What a world it will be.”

And what a world they have already made, where, when a queer teenager dies, their parents exclaim, “We failed, don’t you see? We didn’t see him and we failed.” Where invisibility is known and recognized. Where LGBT youth are doors into another state of consciousness. In a narrative reminiscent of (and inspired by) Gabriel García Márquez’s Chronicle of a Death Foretold, the end is there from the start, whether we recognize it or not. Pain and love and loss lock hands, and the world moves on cruelly.

Noelle McManus is a student of Linguistics and Spanish at the University of Massachusetts at Amherst, as well as an editorial assistant for the Women’s Review of Books.