Kara Walker: What She Said; What She Did

Reflections on a Talk and Visual Presentation Given by the artist Kara Walker at the Radcliffe Institute For Advanced Study at Harvard University, in December 2014.

Kara Walker’s explanation is straightforward and unexpected. She began creating her famous, indeed infamous, cut paper silhouettes as a way of putting 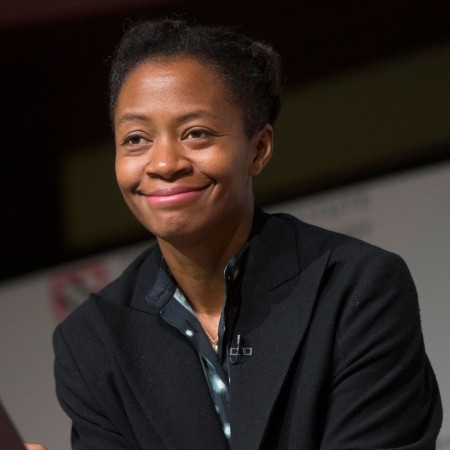 aside the easel and oil paints so central to her training as an artist. A gifted graduate of elite schools, the Savannah College of Art and Design, in Georgia, and the Rhode Island School of Design (RISD), she is a second-generation heir to the grand traditions of western artists, painters in particular. Walker’s father, Larry Walker, is a studio artist and arts administrator. She says that she knew from an early age that she would follow a similarly creative path. By the time she reached her early twenties, her decisions were not about what she would do in life, they were about how she would express herself through the visual arts.

Those decisions were also, increasingly, about how her work related to issues of race, gender, and history. Born in California, Walker moved, as a teenager, to Atlanta, Georgia. The move to RISD, in Providence, Rhode Island, was, for her, a sharp break with the South. Leaving that environment allowed her, and at times forced her, to look back and see it from startling and disruptive perspectives. Her art was her means of discovering what she thought and how she felt about her evolving identity. Uneasy with what she considered the restrictions of the painting, often allegorical, she was doing, she found her way, through sketching, reading, and writing, to what she refers to as a “second-class art form” that allowed her to work outside of the art historical burdens of “the grand trajectory.”

Cut paper work was quite popular throughout much of the nineteenth

century. It was a parlor art, embraced by amateurs and often practiced by genteel ladies and gentlemen, although, as with all creative endeavors, there were virtuosi in the form. Profile portraits, most common in the genre, were both striking displays of skill and charming keepsakes. Larger elaborate works, displayed in galleries or at public occasions, showed the likes of patriotic, classical, or biblical scenes. It was essentially a narrative form, and that is the aspect Walker exploited.

The tradition favored silhouettes of anonymous ladies in crinolines and gentlemen in top hats strolling arm in arm, seated on garden benches, or otherwise decorously occupied. Walker, however, produced brilliantly realized black, opaque, expressionless figures, young and old, male and female, with white or African-inflected hair and facial features, enthusiastically engaged in acts of physical and sexual assault, age-inappropriate coupling, and racial humiliation. She seemed to further mock the scenes of sex and violence by giving them wittily stylized lengthy titles playing on those of Victorian novels of crime and passion. A 1994 mural was called Gone, An Historical Romance of a Civil War as It Occurred Between the Dusky Thighs of One Young Negress and Her Heart.

The art market went wild. Prices for the work were sky high. And controversy exploded. Some complained that she was exploiting black history. Others, that the work was obscene. How awkward, some said, that most of her patrons were white. There were panels, articles, debates. All in all, a young artist’s dream of recognition and publicity. And indeed, at 27, Kara Walker became one of the youngest recipients of the coveted MacArthur “genius” award, because somewhat eclipsed by all the controversy was the salient fact that she was a woman of rare talent, originality, and command of various visual media.

For years, that simmering scandalous reputation was associated with her name, although she worked in other media and styles, including video and performance art, and became known as an outstanding teacher in the MFA program at Columbia University. The notoriety lingers, however. At a recent talk Walker gave at the Radcliffe Institute For Advanced Study at Harvard University, a curator of rare books at the Harvard Library asked her about the genesis of a notebook of hers, now in their collection, which he described as “the raunchiest book I ever bought for myself or for the Harvard College Library.” Walker explained how it was indeed her earliest effort to think clearly about the thin line between Victorian romance novels and pornographic novels of that era and her own attempts to find access to aspects of the two idioms later incorporated into in her silhouettes.

As her references to novels, extensive research, and a thinking through of early stages of a project by way of both sketching and writing all suggest, Walker is exceptionally well read, with a wide-ranging curiosity that allows her to find solid, though unexpected and original, connections among ideas and materials she then incorporates into her work. She speaks of this process in ways that make sparks fly even as you listen to her. She is not just willing, but able, in ways not all visual artists necessarily are, to talk about her process in all its determination, uncertainty, exhilaration, intention, and association.

In part, what she calls her “chutzpah, bravado, and ego,” enabled her to accept the 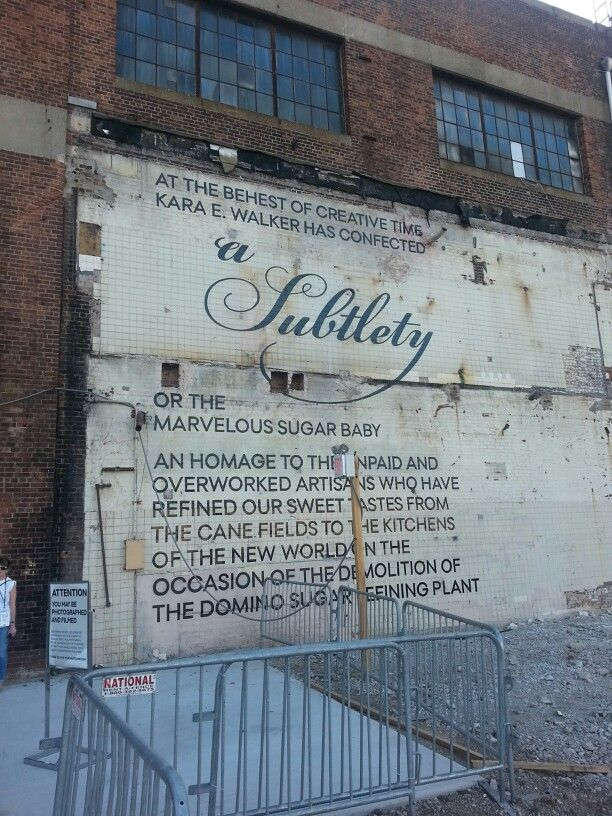 Domino Sugar factory project. At first, she refused it, but when she was approached a second time she agreed to accept the commission, although she admits she did so with no idea of what she would do.

Built in 1856, the Domino Sugar factory on the waterfront in Williamsburg, Brooklyn, was about to be demolished. The New York City organization Creative Time, is committed to the production of temporary works of public art so startling and unexpected that they will catch the interest of people who do not follow the doings of the art world. The group had a once-in-a-lifetime site and sought an artist equal to the opportunity. The old building, derelict but still safe for such a purpose, had been abandoned by the Domino company, but never completely emptied of traces of its use. Surfaces were caked with the hardened residue of sugar and its by-products, which had been baked in summer heat, frozen in winter storms, and pummeled by wind and rain through damaged walls, windows, and ceilings. The factory was a pungent place; pools of molten, sugary, muddy liquid spread across the floors after a rain, and ebbed into granular patches of sticky, sweet-smelling muck.

Gradually, Walker seized upon ideas connecting sugar production to the centuries of slavery in America. Would she create a performance piece? After all, this is the woman who had once sung/shouted the lyrics to the Rolling Stones’ Brown Sugar in one such staged work. She undertook reading and more reading on the history of sugar production, the history of its iconic by-product, molasses, and its many racist associations. But racism’s by-products could also be creative improvisation—jazz, syncretic religions. How to get out of the sticky trap of white crystals and brown residue? How to get beyond the lament?

She read about the long history of sugar in the East and the West. How it
became a European delicacy, compared to, say, honey, which was around much longer, and how sugar had a different cultural/social meaning, being a kind of primal “sweet salt.” How sugar sculpture had come from the East with trade during the Middle Ages. And gradually sugar sculpture became Walker’s reference point, 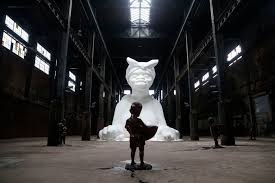 culminating in a forty-foot female Sphinx constructed of eighty tons of sugar on the main floor of the “cathedral” of the ruined factory. It was a work at once monumental and ephemeral and required a huge team of craftspeople to build. Walker had only an eight-week construction period, ten weeks of public exhibition, and a contractual agreement that the entire project, including a group of life-sized black serving boys made of resin and molasses, would be totally demolished in the end. In May 2014, Walker exhibited her first work of sculpture, A Subtlety, or the Marvelous Sugar Baby, an Homage to the unpaid and overworked Artisans who have refined our Sweet tastes from the cane fields to the Kitchens of the New World on the Occasion of the demolition of the Domino Sugar Refining Plant.

Another video shows audience reaction to the Sphinx, with her exaggerated
“black” features and body, crouched like an apparition of impossible whiteness. Her head is wrapped in an almost jaunty bandana, her massive breasts could be sentries at a sort of blind entrance to her body, and her huge backside is raised in a way that her genitalia are clearly visible and carved with considerable detail. Walker’s Sphinx was, of course, a sensation, and thousands of viewers rushed to see it. The video shows that many black families brought their young children. Members of those families often held their iPhones and iPads aloft in quiet, patient determination to get just the right images, their photography, done with outstretched arms, almost a form of salutation.

And then there were the less than awed spectators. The (usually) white men who had themselves photographed tweaking the figure’s nipples, or standing behind her in a way that the camera could capture the illusion that they were poking out-stretched fingers into her massive vagina. There was a noticeable lack of originality about those impulses. Sometimes edgy conversations ensued. Walker’s wonderful observation is that the Sphinx “had a kind of generosity about her,” in terms of reverent and irreverent audience response.

In the end, the artist saw it all demolished. She kept one part of the work for herself – the figure’s left hand. It is carved with the thumb poking through the middle fingers—a “fig,” an obscene and insulting gesture in some cultures. But then, too, in candomble, a Brazilian martial art of African origin, it is a gesture signifying fertility; charms of that design are worn around the neck. “I felt,” said Walker, “that this figure, both servile and regal, could have a hand gesture that is both empowering, and dismissive of her audience.”

Marilyn Richardson writes on the arts.