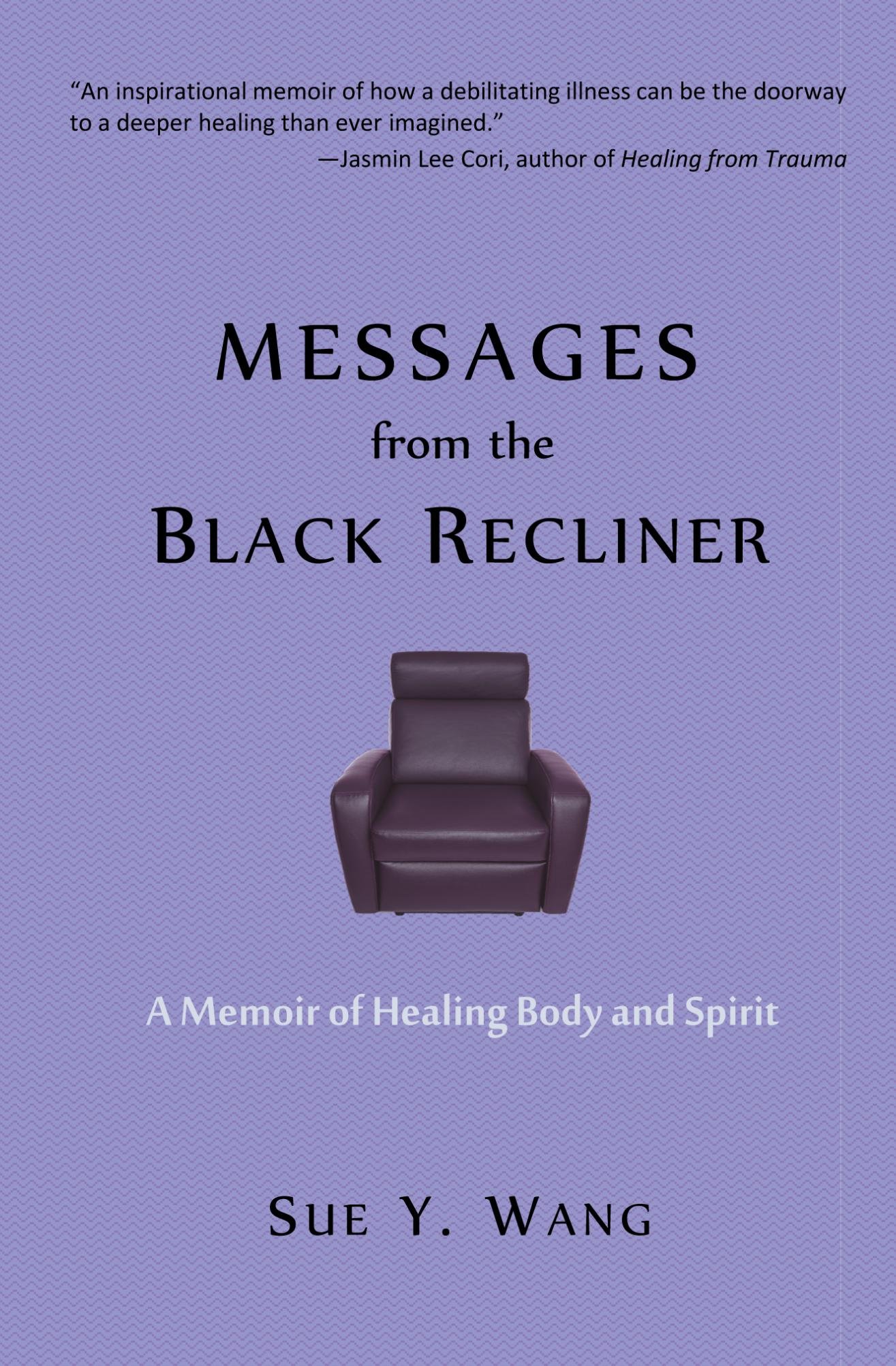 I had a terrible outcome giving birth the first time, and five years after, I got mysteriously, chronically ill. I healed and wrote a memoir, Messages from the Black Recliner: A Memoir of Healing Body and Spirit about it.

I was raised in Taiwan and came to the US at age thirteen. I have plenty of cultural and familial baggage to stop me from sharing my tale. I knew the rules. Do not broadcast family ugliness (a Chinese proverb). Do not bring shame to the family. Be quiet, conform, suck it up and endure—that’s the righteous, humble way.

My given name is Sue-Yi, “ladylike-propriety” in Mandarin. My family and loved ones still call me that. A name in the Taiwanese/Chinese culture represents the parents’ hopes and intentions for their child. As an extroverted, bright-eyed girl, I was not at first the demure being I was supposed to be. But I was scared into obedience and silence, as I witnessed and experienced domestic violence. My father, a product of a patriarchal society, took out his frustration from a traumatic World War II childhood on his family. There was no jail time for hurting a spouse, and my relatives chalked it up to a woman’s bad luck if her husband hit and scolded her. In both of my parents’ families, girls had been given away due to poverty and superstition. The birth of a girl was often a disappointment. When I came, my father lost a bet that his firstborn would be a boy.

In grade school, I was punished and humiliated publicly for not complying with my teacher’s rules. I was eight. I got the message: being perfect, controlling my fears and behavior, would be much easier than grappling with an external world I could not control. There was no adult I could count on. My inner child disappeared, and life became work. Work to serve others. Work to learn English quickly, in order to get into a good college. Work to swallow the discontent at home, along with the meals my immigrant parents toiled to bring to the table. Guilt was a great motivator. I was indebted to my mother, who told us kids that she stayed in the marriage for us.

It was my life, so it felt normal. My family’s dysfunction and stress became mine. I carried them to Wellesley, where I attended college. There I ground my teeth so hard at night that I woke up my roommate. I was used to the low-grade depression and had yet to understand it. I was saved by my extroversion. I bonded with generous friends and met kind adults. My dean, the venerable Pamela Daniels, showed me her enthusiasm for my intellectual development—the first time someone wanted me to enjoy learning for my own sake.

With a missing sense of self, it was hard to figure out a major. My mother wanted me to be a doctor, but even with a strong science background, I was borderline-flunking chemistry. Dean Daniels encouraged me to take humanities classes, and I stopped consulting her. I thought she didn’t understand my duties as a good daughter. I was failing my mother, and my father thought I had “turned American,” dating and dancing in college.

I began to break a bunch of rules.

I did not go to medical school. I became a career counselor, specializing in self-assessment. Career counseling was an unknown to my Asian/Asian American family. My relatives had trouble understanding what I did. Later, though, my father recognized the advantage of a Harvard education for his daughter, and he helped to pay for my graduate study.

I married outside of our culture, subconsciously not wanting to create a family that looked like the one I grew up in. I converted to another religion. My father told my mother that a married daughter had left the family anyway.

As the eldest of my family’s first American generation, I was interested building bridges with others outside of our ethnic cocoon—even though it had its protective qualities. Perhaps my disconnectedness from my parents during my childhood prepared me for my adult disconnectedness from them. It wasn’t until finding and freeing my inner child with a skillful, compassionate counselor that I felt good about asserting myself.

As I wrote my memoir, it was daunting to process the anger and disappointment about my life, knowing that my vulnerability could be revealed to the world. Could I really handle it? What was the point of it? My first drafts were flaming mad, calling out the wrongs I suffered. But in the process of writing, I began to look at my victim mentality and life situations from others’ perspectives. I relived conflicts and discerned lessons, which became the themes of my book: motherhood, childhood, relationships, family of origin, power, illness, wellness, the self, and mind-body-spirit connection.

I felt no shame about losing a child. No shame about telling a story of domestic violence, of illness suffered, of therapy attended. I was elated that I had found

the tools to solve my health dilemma. I wholeheartedly recommend therapy with someone who clicks. Often I hear from people that therapy did not help them. Please, seek a therapist you resonate with! Many of us inherit beliefs, often from wounded parents, that keep us quiet, sad, and disengaged. But you can undo these beliefs with a caring, unbiased witness, as the brilliant Alice Miller writes in The Drama of the Gifted Child.

I know that telling my story may change my relationships. I push the envelope with some trepidation. My father, one of the antagonists in my memoir, asked for a copy of it a few months before I published it. This gave me pause. Would I hurt his feelings? He knew I was writing about recovering from the effects of a harsh childhood. He said, “Good, you are helping people.” But did he know the role he played in my life? Through the writing, and during his recent visit, I forgave him. I understand that he too was a child once, and life was terrible to him. My father, like my mother, did the best he could. I’d imagine that he might be sad to come across as a mean, crass person in the memoir, but I hope he will understand that he was a teacher to me in a karmic way.

My memoir has become an entity of its own—like a play, in which characters act out a story to show others cause and effect, and ways to love oneself. My goal is to offer a meaningful story and inspire others to do something to heal themselves, to see the connection between angst and health. These messages are more important than any background noise of disapproval and projections in my psyche. The memoir is not about me anymore. It is about something bigger: the conversation on healing.

I was given a huge opportunity to learn. Why not offer my lessons to help the world? I know the immense force trauma, and cultural and societal expectations, can exert on a person. Yet there is an energy, a will that keeps me going. Like Virginia Woolf and Gloria Steinem, I claim the power to seek my truth and articulate it. My calling is to share, commune with others about our shadows, dark nights, and transformation. And to bring insight—it always empowers. 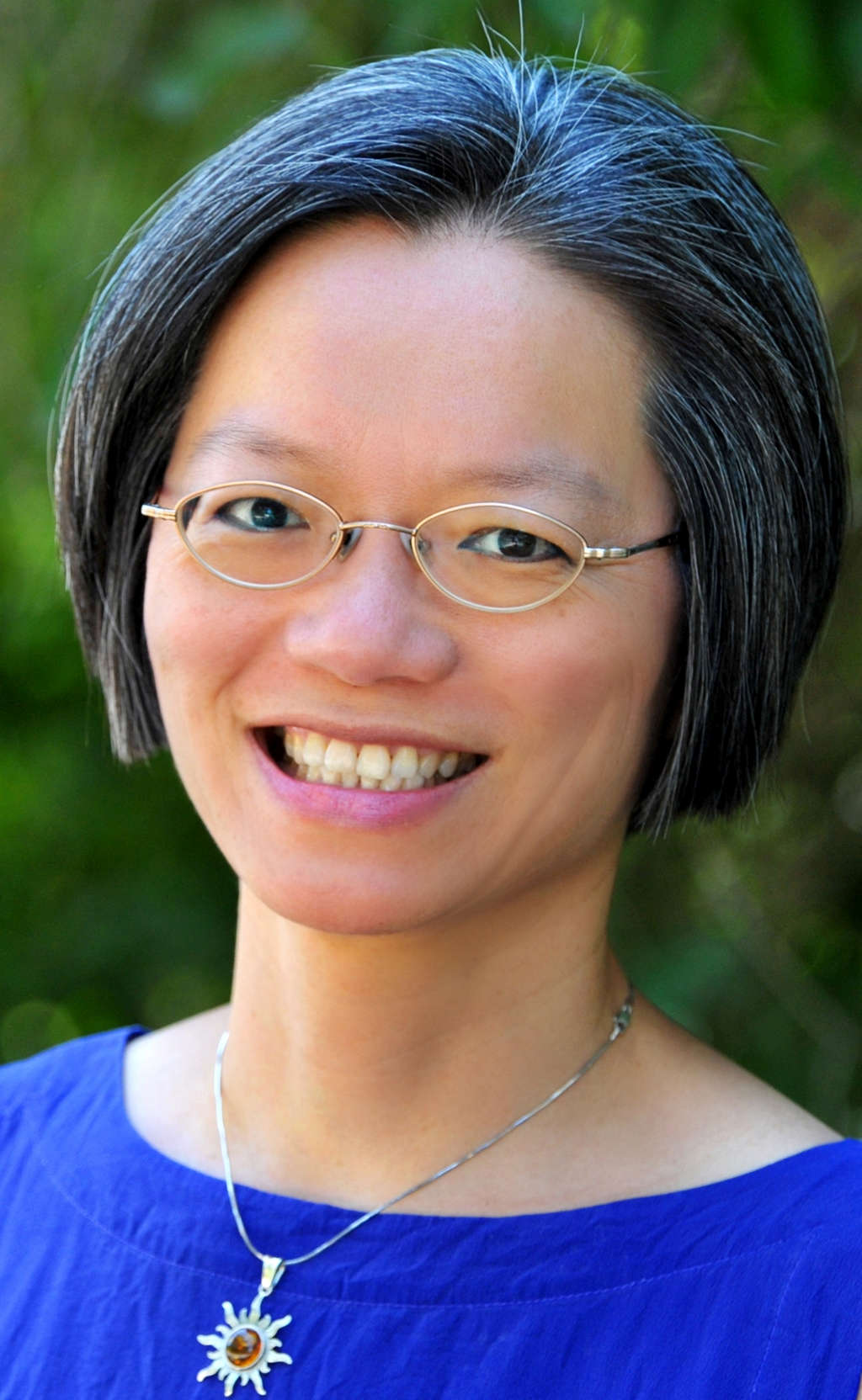 Sue Wang is a Reiki Master, psychological astrologer, and author. As an energy intuitive, Sue helps fellow light seekers reclaim the essence and power within via the mind-body-spirit connection. A graduate of Wellesley College and the Harvard Graduate School of Education, Sue worked as a career counselor and administrator until moving from Massachusetts to Boulder, Colorado, in 2009.