on February 7 cuts $8.6 billion from the Supplemental Nutrition Assistance Program (SNAP, formerly known as food stamps) over the next ten years. Like almost anything that harms poor Americans, the cuts to SNAP will hurt women and children most. Among adult SNAP recipients, more than three-fifths are women, and among older adult participants, almost two thirds are women. Taken together, women and children are nearly four-fifths of all participants. Thus the cuts disproportionately affect women, both as recipients and as parents.

The new farm bill reduces benefits sharply for 850,000 households, about 1.7 million people, in sixteen states and the District of Columbia. Why only those states? Because they are the ones that had used a peculiarity in the law—called the “heat and eat” provision by antihunger advocates, and the “LIHEAP Loophole” by congressional budget cutters—to raise benefits for SNAP households. In short, 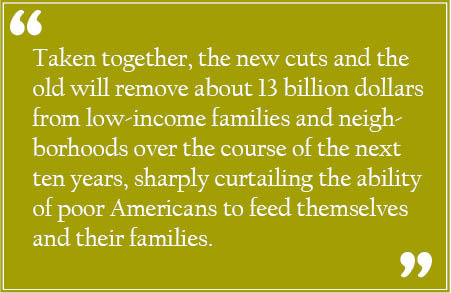 they used a token payment of a dollar a year from the Low Income Home Energy Assistance Program (LIHEAP) to qualify applicants for a Standard Utility Allowance, which in turn made them eligible for larger Excess Shelter Cost deductions from the income used to calculate SNAP benefits. In SNAP, the lower your income the larger your benefit, so any substantial deduction to countable income raises benefits. (Things related to SNAP get complicated quickly. For a clear explanation of this provision and an overview of the Farm Bill, see “Summary of the 2014 Farm Bill Nutrition Title: Includes Bipartisan Improvement to SNAP while Excluding Harsh House Provisions,” from the Center on Budget and Policy Priorities.) For states, “heat and eat” was a smart strategy to bring additional federal dollars into the local economy. The average increase in benefits was equal to about $90 per month, so now households that received these higher benefits are facing a projected cut of that amount—the equivalent of about a third of the average monthly household benefit of $275 in fiscal year 2013.

To make matters worse, these cuts come on top of a previous across-the-board cut on November 1, 2013, when a temporary increase in benefit levels enacted as a part of the American Recovery and Reinvestment Act—the stimulus—expired. That cut took away benefits of about $10 per person, or $29 for a family of three.

Food pantries and food banks across the nation reported a sharp rise in people seeking help after the November cuts; those in the states targeted by the new cuts are predicting grim outcomes. Taken together, the new cuts and the old will remove about 13 billion dollars from low-income families and neighborhoods over the course of the next ten years, sharply curtailing the ability of poor Americans to feed themselves and their families. The cuts are particularly devastating to poor women and their children because of the near disappearance of cash assistance to poor families in the aftermath of the welfare reform of the mid-1990s. While 42 percent of SNAP households received Aid to Families with Dependent Children (AFDC, or welfare) in 1992, only eight percent now receive income from TANF (Temporary Assistance for Needy Families, or welfare reform). Thirty percent of SNAP households have income from paid employment, but twenty percent have no income at all.

These cuts fall on some of the nation’s most vulnerable people. Although Congress portrayed the cuts as a cost-saving measure, the farm bill contained many other opportunities for spending reductions that were not taken. As Connecticut Representative Rosa DeLauro put it, “Instead of working to end hunger, this farm bill takes food from the plates of 1.7 million Americans. Simultaneously, the negotiators have chosen, against the will of a majority of Congress, to re-open farm subsidy loopholes and strip out payment limits, so that millionaires and wealthy agribusinesses can continue to get handouts.”

How did this happen? In recent decades, food assistance has generally fared much better than cash assistance. The US Department of Agriculture (USDA) administers fifteen separate food and nutrition assistance programs, and one in four Americans participates in at least one of these. While cash welfare for families and single adults has dwindled to nearly nothing, food assistance in general, and SNAP in particular, have grown. Last year SNAP provided benefits to 47 million Americans each month, or one in seven. The program aided millions more Americans because of the money it pumped into the economy; in its publication “Building a Healthy America,” the USDA estimates that each dollar of SNAP benefits generates $1.80 in economic activity, such as jobs for grocery store cashiers, warehouse workers, and truck drivers. Furthermore, SNAP is one of the nation’s most effective countercyclical programs: it rises as unemployment grows and eventually shrinks after it falls. During the Great Recession, SNAP participation surged, rising seventy percent between 2007 and 2011.

That SNAP surge, and its associated price tag, caught the eye of fiscal conservatives. When the Republicans secured a majority in the House of Representatives in the 2010 midterm elections—fueled to a great extent by victories of candidates backed by the Tea Party—deficit hawks turned their attention to SNAP. They claimed the program was wildly out of control, undermined incentives to work, promoted “dependency,” and was rife with fraud and abuse. Their criticisms were so similar to those once levied against AFDC that the political scientist Joe Soss has labeled the process the “welfare-ization of food stamps.” 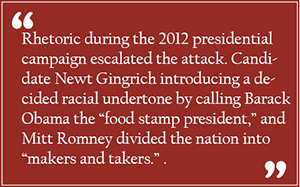 candidate Paul Ryan’s budget proposals, which would have eliminated the entitlement to SNAP by turning it into a block grant—the same strategy that was used in welfare reform to destroy the entitlement of cash assistance. Critics of the SNAP program proposed to eliminate funds for outreach, to reduce the authority of states to simplify the application process, and to increase work requirements—including a provision that would have allowed states to impose new work requirements and to retain half of any savings achieved by withholding benefits from recipients who were unable to find jobs. This basically would have given states an incentive to eliminate people from the program.

The version of the farm bill that passed the House of Representatives in September 2013 contained all these provisions and imposed more than $39 billion in cuts over the ten-year time frame. House and Senate conferees were left to reconcile the Senate version, which contained $4.5 billion in cuts, and the far more draconian House version, and to do so amid the budget fight that resulted in the October 2013 government shutdown.

In the long run, it was probably the traditional politics of agriculture, plus the angry public reaction to the shutdown, that resulted in the elimination of the deep cuts sought by conservatives from the final bill. Both houses of Congress were under considerable pressure to reach an agreement on the long-overdue farm bill. Farm, food manufacturing, and insurance lobbies were pressing hard for the farm-related provisions of the bill, including new crop insurance subsidies, and a wide range of sustainability and health groups were pushing for provisions that enhanced support for fruit and vegetable growers, farmers’ markets, and environmental protections. Neither party could afford to be seen as unresponsive to the farmers who produce the nation’s food supply. While antihunger groups tried hard to mobilize opposition to the SNAP cuts, the particular cut that the conferees eventually agreed upon was acceptable even to some traditional antihunger allies. For example, Bob Greenstein, the influential founder of the Center for Budget and Policy Priorities, took the position that Congress had never intended the heat-and-eat provision to allow applicants to deduct utility costs that they did not actually pay. The limitation of the cut to the sixteen affected states meant that Congress members from other states had little incentive to oppose it, and farm-bill politics meant that they had many reasons to accept it.

Looking forward, antihunger activists and policy analysts need to address the underlying inadequacy of the SNAP benefit rather than relying on clever fixes and workarounds that may eventually backfire. Meanwhile, poor people, primarily poor women and their children, are facing the grim reality of getting by on benefits that will equal only about three-fifths of what they had been receiving. Since SNAP benefits have always run out before the end of the month—87 percent are redeemed within two weeks—we can expect to see even more hunger in the land of plenty. 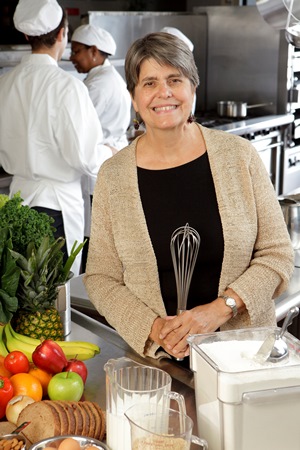 Jan Poppendieck is professor emerita of Sociology and Policy Director of the New York City Food Policy Center at Hunter College. She is the author of Free For All: Fixing School Food in America (2010); Sweet Charity? Emergency Food and the End of Entitlement (1998) and Breadlines Knee Deep in Wheat: Food Assistance in the Great Depression. A second edition of Breadlines with an update about the recent farm bill is due out from the University of California Press in May.