“A Star Danced, & Under that Was I Born”: Ellen Terry’s Brilliant Career

By Penny Farfan for WOMEN = BOOKS

Ellen Terry was a forerunner of today’s celebrities, living a glamorous life in the public eye. Inscribing a photograph of herself as Beatrice in Much Ado About Nothing with a favorite line from the play—“a star danced, & under that was I born”—she suggested through her character’s words the sparkle of her own stage presence and public personality. 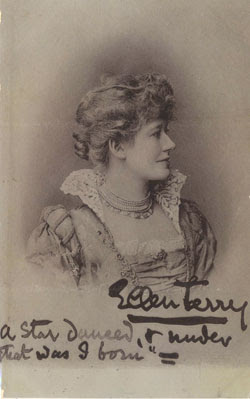 Ellen Terry as Beatrice in Much Ado About Nothing (1880);
Tuck’s Celebrities of the Stage post card, postmarked 1905;
collection of the author.

Terry was born into a theatrical family and made her stage debut at the age of nine. When she was 16, she married the 46-year-old painter George Frederic Watts, who captured her image in ravishingly beautiful portraits, as did the pioneering photographer Julia Margaret Cameron. The marriage between the youthful actress and the middle-aged painter lasted less than a year, but it inspired the comic imagination of Virginia Woolf, who wrote about the couple in her only play, Freshwater, performed by family and friends at a Bloomsbury party in 1935.

Following a brief return to the stage, Terry eloped to the country with her lover, the fashionable architect and designer Edward Godwin. They had two children, Edith and Edward Gordon Craig, who both became well-known theater artists in their own right. 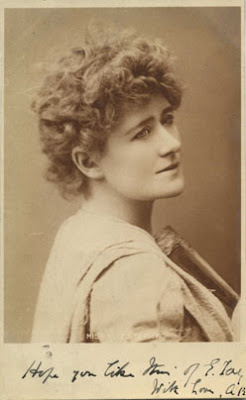 After six years with Godwin, Terry returned once more to the stage—this time for good—and soon began her career-defining acting partnership with Henry Irving, whose celebrated productions at the Lyceum Theatre dominated the late-nineteenth-century London stage and toured extensively in North America.

At the height of her fame, Terry was again famously painted, this time by fashionable society artist John Singer Sargent, whose remarkable portrait of her as Lady Macbeth created a stir when it was first exhibited at the New Gallery in London in 1889. 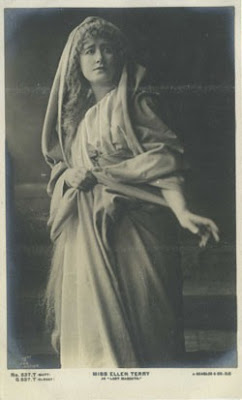 Despite the scandals of her early life with Watts and Godwin, her two children born outside of marriage, her ambiguous relationship with Irving, and her two later unsuccessful marriages, Terry remained a beloved public figure at the time of her 50-year stage jubilee in 1906,. She was admired not just by audiences but by leading actresses Sarah Bernhardt and Eleanora Duse and by key modernists George Bernard Shaw and Isadora Duncan.

Terry’s international celebrity was enhanced by the fact that her career coincided with developments in the medium of photography, including the invention and popularization of cartes-de-visite and picture post cards that were collected, exchanged among friends, and sent through the mail. 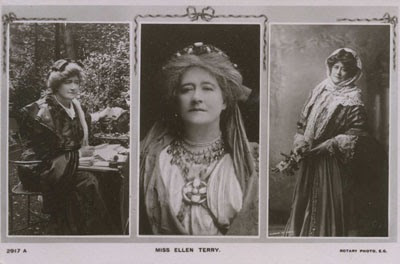 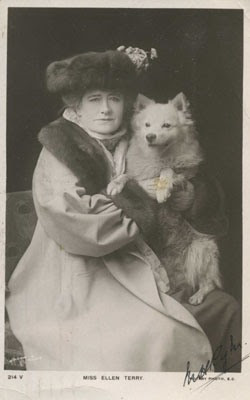 Ellen Terry with her dog, Rotary Photographic Series post card,
sent to a Mrs. Sealy at Elham near Canterbury from “yours ever to be respected, Maurice,” postmarked London 1906; collection of the author.

As the post-card craze came to an end with the start of World War One, Terry’s long and distinguished career on the stage was winding down and the film industry was on the rise, along with a star system that had not existed during her prime as an actress. She appeared in a few unsuccessful films between 1916 and 1922 but did not have the same impact in this new medium.

She died in 1928, as silent film was giving way to the “talkies.” Still, behind the luminous beauty of the great stars of the classic cinema and the charisma and talent of the actresses that captivate us on screen today is the glimmer—like a more distant yet still “dancing” star—of one of the great figures in the history of acting and a forerunner of the phenomenon of modern media celebrity.

Penny Farfan is Professor of Drama and English at the University of Calgary in Canada. She is the author of Women, Modernism, and Performance (Cambridge University Press, 2004), as well as many articles on modernism and performance. She is also the co-editor of Theatre Journal.

Read Penny Farfan’s review of A Strange Eventful History: The Dramatic Lives of Ellen Terry, Henry Irving, and Their Remarkable Families in the January/February 2010 issue of WRB.