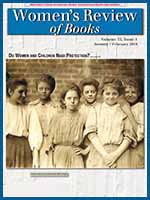 Gender, Race, and Credibility in the age of Trump Tainted Witness: Why We Doubt What Women Say About Their Lives By Leigh Gilmore:
Reviewed by Joy Castro

Property or Spouse? Bound in Wedlock: Slave and Free Black Marriage in the Nineteenth Century By Tera W. Hunter
Reviewed by Katherine Franke

Marching Toward Identity Lost in the USA: American Identity from the Promise Keepers to the Million Mom March By Deborah Gray White
Reviewed by Leslie Cagan

You are a God Exist Otherwise: The Life and Works of Claude Cahun By Jennifer L. Shaw
Reviewed by Irene Gammel

Trading Protection for Equality A Class by Herself: Protective Laws for Women Workers, 1890s-1990s By Nancy Woloch Reviewed
by Katherine Turk

Glitter, False Eyelashes, and Attitude The Only Way Home Is Through the Show: Performance Work of Lois Weaver Edited by Jen Hervie and Lois Weaver
Reviewed by Joan Lipkin

A Fortress and a Prison Hunger: A Memoir of (My) Body By Roxane Gay
Reviewed by Courtney Patterson-Faye 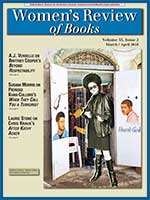 Revolution Now When They Call You a Terrorist: A Black Lives Matter Memoir By Patrisse Khan-Cullors Reviewed by Susana Morris

The Origins of Feminism Beyond Respectability: The Intellectual Thought of Race Women By Brittney C. Cooper Reviewed by A. J. Verdelle

The Gay Nineties We Were Witches: A Novel By Ariel Gore; Stray City: A Novel By Chelsey Johnson Reviewed by Jessica Jernigan

Spotty The H-Spot: The Feminist Pursuit of Happiness By Jill Filipovic Reviewed by Emily Toth

Epistolary Autobiography The Book of Emma Reyes: A Memoir By Emma Reyes Reviewed by Marjorie Agosin

Hermitesses The Ladies of Llangollen: Desire, Indeterminacy, and the Legacies of Criticism By Fiona Brideoake Reviewed by Lisa L. Moore

Fear, Hunger, and Fear Lioness: Golda Meir and the Nation of Israel By Francine Klagsbrun Reviewed by Eleanor Roffman

All Museums are Sex Museums Sex Museums: The Politics and Performance of Display By Jennifer Tyburczy Reviewed by Patricia G. Berman

We Do Awakening: How Gays and Lesbians Brought Marriage Equality to America By Nathaniel Frank Reviewed by Alison Lefkovitz

The Tenure Tightrope Written/Unwritten: Diversity and the Hidden Truths of Tenure Edited by Patricia A. Matthew Reviewed by Marybeth Gasman

Good Reads Dreams from my Father By Trish Crapo 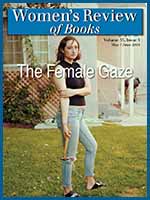 The Fire This Time No Ashes in the Fire: Coming of Age Black & Free in America By Darnell L. Moore
Reviewed by Mariam Williams

Sober Thoughts The Recovering: Intoxication and Its Aftermath By Leslie Jamison
Reviewed by Ariel Gore

Between a Rock and a Hard (to) Place Raising Government Children: A History of Foster Care and the American Welfare State By Catherine E. Rymph
Reviewed by Stacey Patton

Careless Who Will Care for Us?: Long-Term Care and the Long-Term Workforce By Paul Osterman
Reviewed by Karen Kahn

The Most Talked About Voice in America Queen of Bebop: The Musical Lives of Sarah Vaughan By Elaine M. Hayes
Reviewed by Imani D. Owens

Matriotic The Second Line of Defense: American Women and World War I By Lynn Dumenil
Reviewed by Tammy M. Proctor

Central caste-ing Ants Among Elephants: An Untouchable Family and the Making of Modern India By Sujatha Gidla
Reviewed by Indira Karamcheti

Complaints and Disorders Sick: A Memoir By Porochista Khakpour
Reviewed by Julia Berner-Tobin

Vivid Old in Art School: A Memoir of Starting Over By Nell Painter
Reviewed by A.J. Verdelle 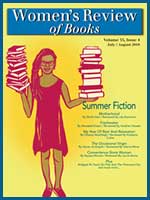 The Mother Position Idiophone By Amy Fusselman; The Carrying By Ada Limón
Reviewed by Jan Clausen

Trouble The Terrible By Yrsa Daley-Ward
Reviewed by Erika Gallion

Charged The Power By Naomi Alderman
Reviewed by Kait Heacock

Inside Fighter Amateur: A True Story About What Makes a Man By Thomas Page McBee
Reviewed by Kate Schatz 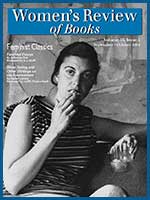 Isn’t it Rich? Essential Essays: Culture, Politics, and the Art of Poetry By Adrienne Rich; edited and with an introduction by Sandra Gilbert
Reviewed by E.J. Graff

Where is my Mind? Severance By Ling Ma
Reviewed by Jessica Baumgardner

Off the Hook Consent on Campus: A Manifesto By Donna Freitas
Reviewed by Jordan Allyn

Writers of Conscience Women of Resistance: Poetry from 50 Activists Edited by Danielle Barnhart and Iris Mahan
Reviewed by Ana Castillo

Feature “I Couldn’t Do What I Do Without This Book”

The Year of the Woman, Again International Women’s Year: The Greatest Consciousness-Raising Event in History By Jocelyn Olcott
Reviewed by Ellen Chesler

Identity and Action Unapologetic: A Black, Queer, and Feminist Mandate for Radical Movements By Charlene A. Carruthers
Reviewed by Susana Morris

Listen Up The Linguistics of Texting An essay by Noelle McManus 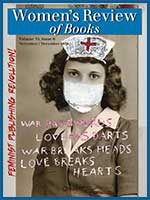 Manifesto for Taking Risks The Cost of Living: A Working Autobiography By Deborah Levy
Reviewed by Carole DeSanti

Poetry Getting to Choose By Irene Willis

Sprayed Fame: The Highjacking of Reality By Justine Bateman
Reviewed by Julie Baumgardner

Wake Up Call The Mental Load: A Feminist Comic By Emma, Translated by Una Dimitrijevic; Fruit of Knowledge: The Vulva vs. The Patriarchy By Liv Strömquist
Reviewed by Tahneer Oksman

Listen Up Uncle White Supremacy An essay by Anastastia Higginbotham