Death's Door: Modern Dying and the Ways We Grieve
By Sandra Gilbert
Reviewed by Rebecca Steinitz

Freedom is Not Enough: The Opening of the American Workplace
By Nancy MacLean
Reviewed by Liza Featherstone

Unsung Heroines: Single Mothers and the American Dream
By Ruth Sidel
Single Mother: The Emergence of the Domestic Intellectual
By Jane Juffer
Reviewed by Martha Nichols

Breaking Trail: A Climbing Life
By Arlene Blum
On The Ice: An Intimate Portrait of Life at McMurdo Station, Antarctica
By Gretchen Legler
Reviewed by Judith Niemi

Secret Daughter: A Mixed-Race Daughter and the Mother Who Gave Her
Away
By June Cross
Reviewed by Florence Ladd

Marian Roth: The Photography of Chance
By Melanie Braverman

What It Is To Be Human
By Trish Crapo

Stripped: Inside the Lives of Exotic Dancers
By Bernadette Barton
Reviewed by Leila J. Rupp

Building Houses out of Chicken Legs: Black Women, Food, and Power
By Psyche A. Williams-Forson
Reviewed by Francesca Gamber

Ministry of Pain
By Dubravka Ugresic
Reviewed by Meredith Tax

Murder in Byzantium: A Novel
By Julia Kristeva
Reviewed by Molly Hite

The Trouble Between Us: An Uneasy History of White and Black Women
in the Feminist Movement
By Winifred Breines
Reviewed by Ellen Willis

Our Bodies, Ourselves: Menopause
By The Boston Women's Health Book Collective
I Feel Bad About My Neck, and Other Thoughts about Being a Woman
By Nora Ephron
Reviewed By Emily Toth

Straight to Jesus: Sexual and Christian Conversions in the Ex-Gay Movement
By Tanya Erzen
Reviewed by Esther Kaplan

The Heart to Artemis: A Writer's Memoir
By Bryher
The Player's Boy
By Bryher
Women Together/Women Apart: Portraits of Lesbian Paris
By Tirza True Latimer
Reviewed By Martha Vicinus 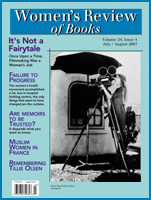 Pushed: The Painful Truth About Childbirth and Modern Maternity Care
By Jennifer Block
Born in the USA: How a Broken Maternity System Must Be Fixed to Put
Women and Children First
By Marsden Wagner
Birth: The Suprising History of How We Are Born
By Tina Cassidy
Reviewed by Sarah Blustain

Split Decisions: How and Why to Take a Break from Feminism
By Janet Halley
Reviewed by Lisa Jervis

Capitalizing on the Curse: The Business of Menstruation
By Elizabeth Arveda Kissling
Reviewed by Phoebe Connelly

Muslim Girls and the Other France: Race Identity Politics, and Social
Exclusion
By Trica Danielle Keaton
Breaking the Silence: French Women's Voices from the Ghetto
By Fadela Amara with Sylvia Zappi
Reviewed by Eunice Lipton

The View From Castle Rock:Stories
By Alice Munro
The Light of Evening
By Edna O'Brien
Reviewed by Rebecca Meacham

History Matters: Patriarchy and the Challenge of Feminism
By Judith M. Bennett
Reviewed by Rebecca Meacham

Trasparent: Love,Family,and Living the T with Transgender Teenagers
By Cris Beam
What Becomes You
By Aaron Raz Link and Hilda Raz
The Testosterone Files: My Hormonal and Social Transformation from     Female to Male
By Max Wolf Valerio 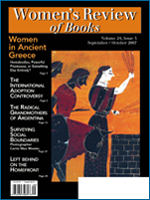 Portrait of a Priestess: Women and Ritual in Ancient Greece
By Joan Breton Connelly
Reviewed by Joy Connolly

George W. Bush and the War on Women: Turning Back the Clock on     Progress
By Barbara Finlay
Reviewed by Renee Loth

The Grandmothers of the Plaza De Mayo
By Rita Arditti

Intimate Politics: How I grew up Red, Fought for Free Speech, and Became
a Feminist Rebel
By Bettina F. Aptheker
Reviewed by Margaret Randall

The Recent Work of Carrie Mae Weems
By Cheryl Kaplan

While They're at War:The True Story of American Families on the     Homefront
By Kristin Henderson
Under the Sabers: The Unwritten Code of Army Wives
By Tanya Biank
Reviewed by Sandi E. Cooper 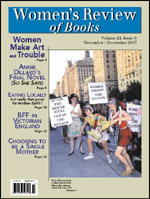